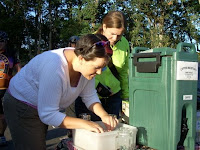 About 50 bicyclists joined us this morning for the August Breakfast on Bikes. The pastries from Cascade Baking Company all had fresh berries and peaches and other ripe fruit. They were just melting in sweet goodness! Traffic seemed lighter than usual, and we concluded that lots of folks had left or were leaving down for the long weekend. Even so, we had about 10 or so new faces join us, so that was gratifying. (Photo: Debbie Boe) 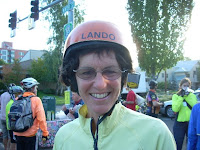 Mary showed up in an old school helmet and we laughed and laughed at the retro look - it was silly in the best way! (Photo: Debbie Boe) 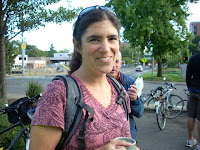 Though the Governor didn't join us again, we did have another special guest! A special surprise was Alex, the brand new Bicycle Recreation Coordinator for Oregon Parks and Recreation. I didn't have a chance to talk with her much, but I'm not even sure she'd officially reported for work. I think her first day might be next week! It was great to meet her and to introduce her to some of Salem's bikey fun. Debbie had met her while counting bicycles on the Center street bridge for the bike count project. (Photo: Debbie Boe)
Posted by Salem Breakfast on Bikes at 1:01 PM