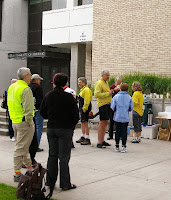 The October breakfast is just one week away! Even with the cool weather, we've been seeing lots of commuters on the road, so come on by. Next Friday, Halloween morning, we'll be at the North Office Mall Building on Winter street NE from 7am to 9am with coffee, pastries, and fruit for you. If you can't go to the office in costume, costume your bike. Better, do both! See you then!

Kimberly Allain and Andrew Lane of St. Vincent de Paul Society were pleasantly surprised at the turn out and the enthusiasm. Meeting participants cited both Portland’s Community Cycling Center and Eugene’s Center for Appropriate Transport as models. Lane noted that the Society already has the building, logistics, and administrative support for metals sorting and recycling, and that the earn-a-bike program in particular fit well with the Society’s mission. In addition to an earn-a-bike program, which at the Community Cycling Center “provides low-income adults with fully outfitted commuter bicycles and five hours of training on safe bicycle commuting,” meeting participants supported bicycle education generally, and programming specifically aimed at getting more women on bikes.

The group agreed to move forward on exploring the idea. Several participants came to the meeting from a background in business and volunteered to work on a subcommittee to write a business plan.

City Councilor Kate Tarter, who called the meeting, will also be talking about the project at the Salem Bicycle Club general meeting on the 28th.
Posted by Salem Breakfast on Bikes at 4:28 PM 1 comment:

We have learned that the City of Salem has been disqualified for the current round of Oregon Department of Transportation Bicycle and Pedestrian Program Grant funding. The City had proposed bicycle improvements on Winter, Myrtle, and Cherry streets NE as part of a longer-range plan to create a safe route for kids to the Kroc Center.

The reason for the disqualification is that the current project at River Road NE And Riviera Drive NE (where River, Front, Commercial, and Liberty all come together) is not yet complete. It had to be finished on October 1 in order for the City to be eligible for this round of funding.

This is disappointing, but not unprecedented. Of the twenty grants awarded last cycle, only 3 were complete by October 1. By what we might call "prevailing community standards," the grant cycle is apparently on the tight side for communities to be awarded grants in consecutive cycles.

According to the City, the traffic engineer who was managing the project quit last summer, and the city has not hired a replacement. The City is behind on delivering nearly all traffic projects, whether for autos or bicycles or pedestrians.

It is also disappointing because this was ODOT money rather than City money, and we all know that budgets all around will be tightening over the next few years. The City intends to continue to explore interest in the project, but the exploration will move forward in an increasingly dismal budgetary climate. We will have updates on future progress and opportunities for public comment or support.
Posted by Salem Breakfast on Bikes at 3:54 PM 1 comment:

The Salem-area Bike Commute Challenge results are in! For full details see the complete results here. You can sort by workplace name or by city.

As most participants know, the BTA built a new database and website for the BCC. During the first two weeks of it, the site was buggy and demand was high; consequently it crashed often, and it was difficult for people to register and to log trips. Anecdotally this reduced participation by a substantial amount. As it was, workplace participation increased by 5% and individual participation by 10%. We've seen the increase in riders on the road - could we have hit 50% this year? Who knows!

So here are the 2008 BCC results. I futzed around and can't get tables to work conveniently, so here's an awkward set of sentences that will present the data in what I hope are meaningful slices, sorted by size of workplace. (In another entry I may be able to write more about the BCC and share some individual stories.)

Next: Business or Non-Profits

Posted by Salem Breakfast on Bikes at 11:36 AM 1 comment:

Each Fall and Spring the Bicycle Transportation Alliance teaches Bicycle Safety Education courses in schools around the city. The BSE curriculum is a 10-hour course designed to teach safe bicycling habits. The "final" is the community ride. The students break into groups of 5 or 6, and are assigned two adult chaperone volunteers. Each group completes a ride of 5-7 miles.

Instructor Robert Fox sends this report on the fall sessions at Waldo JGEMS and Pratum:

Well, we did it again. Fall Bike Safety Eduction classes were a great success. As you know, we taught at both JGEMS (Jane Goodall Environmental Magnet School) and Pratum School. Just one class at each school: 30 6th. graders at JGEMS, and a combined 3rd, 4th, 5th grades class at Pratum.

At Waldo we had 2 kids that could not ride at the beginning of the week. And thanks to the mom who came up to me and made me aware of the situation about her daughter. We went right outside, got her a bike, and she was riding it in less than one minute. no exaggeration, I mean one time down the slight grassy slope coasting, and the next time she was pedaling away. Come to find out, she has had experience in swimming, ballet, soccer, and other physical activity. Great balance and excellent motor skills. I worked with her two more days after school and she did great on the community ride. Another non-riding student could not stay after school but one day, but after about one hour, I finally had him riding! He was not ready to go on the community ride, but I am hoping he can continue to practice at home in the future.

Highlights included the kid who just could not get the hang of "emergency stopping." He flipped over his handlebars all 4 times he attempted emergency stopping. Nothing injured but his pride, and the class was quite entertained! The "hot rod" kids who is riding "no hands" and singing while others are white-knuckling the grips while they wobble down the track - some kids are very frightened of being on the road and are so stiff and tense they can barely ride. Others are so oblivious to the cars they just cruise along, not a care in the world. I guess that is what being a kid is all about.

Pratum is a great little school. It was a little different teaching 3rd and 4th graders, I had not done that before. I know some of the traffic concepts and intersection practice was over their heads, but the hands-on stuff they could certainly handle.

One little 3rd grader was just leaning how to ride, with very limited skills when we started the Bike program. One of the dedicated teachers really took the time to work with her after we got her fitted with helmet and bike. She rode as best she could as the class progressed through the drills and exercises. She crashed, skinned her knee, cried, got up and did it again. She really persevered, and by Friday, she rode the whole community ride! You could just see her self-confidence swelling - she even asked to lead the group on the ride when it was not her turn - by the time we got back from riding on the busy street and down a long dirt road next to the railroad tracks, she had named her bike "Speedy" and could not keep the smile off her face - her mom brought her personal bike to school for me to fix. I removed the training wheels and pumped up the tires on her pink "Barbie" bike. It is way too small for her, but she rode it at school during recess for two days. Teachers and other students were quite impressed with her ability to ride a bike. I know it's something she will never forget.

Thanks to all the volunteers, and thanks for your expert help. Be safe over the winter and I'll be in touch for the big spring season.

Posted by Salem Breakfast on Bikes at 4:04 PM No comments:

On Saturday we visited LifeSource's annual customer appreciation day. The Severin Sisters played poppy bluegrass and there were lots of samples and happy people. It was great to see.

The highlight was seeing Victory Estates, a producer of olive oil in Keizer (no website, alas), and tasting their oil. It wasn't peppery like Tuscan oil, but was more buttery & fruity, and tasted to me like a Spanish oil. It turns out it's made from arbequina olives, a Spanish variety. We were so happy to see this local producer of oil at LifeSource!

One thing was really vexing, though. The parking lot was full; the bike rack was not. Virtually everyone drove cars. LifeSource makes it so easy to bike, and yet on one of their biggest days, only half the rack was full.

The connection between food & fuel, between what we eat and how it gets there, remains really problematic, made almost invisible by modern production & logistics. Even at LifeSource, people are addicted to oil. Some of the samples with the largest crowds, in fact, came from highly packaged, manufactured foods rather than farm-fresh produce.

On Sunday, the New York Times had another great piece by Michael Pollan. If you don't know Pollan, he's the author of The Omnivore's Dilemma: A Natural History of Four Meals, and of In Defense of Food: An Eater's Manifesto. In the Times piece, written as an open letter to the next President, he argues for a new food policy and the shift from what he calls fossil-fuel food, with intensive petrol inputs from fertilizer to shipping, to solar food, whose inputs more clearly & directly derive from the sun. Pollan is always good reading.

Earlier in the day we'd been to the Salem Public Market. It's indoors, runs year-round, and may not be as well known as the Salem Saturday Market. We were the only bicyclists. Cascade Baking Company was there and we had a nice chat with Debra. We talked some about spelt breads. Look out for some holiday baking with spelt!

Interestingly, several of the cars had McCain/Palin stickers on them. At the market we expect to see signs of the lefty/hippie/commie axis, but not necessarily signs of more conservative inclinations. Food security and food authenticity, however, are issues that increasingly unite folks on the right and left. Pollan says, "Reforming the food system is not inherently a right-or-left issue."

Food and transportation is something Salem ought to be able to unite on. As the Capital City for one of the world's great agricultural regions, Salem is positioned to lead on what could be a keystone for bridging the rural-urban and right-left divides. Climate change and a sputtering economy, not to mention the prospects of a more serious depression, will make food and transportation even more critical. Bicycling, the 21st century victory garden, and local farmers will all be key pieces. Whether the legislature does anything on this front is 2009 is uncertain, but we can all do our part to drive less and eat more local food.
Posted by Salem Breakfast on Bikes at 11:26 AM No comments: