Fog, a Little Frost, and a Warm Cuppa Coffee 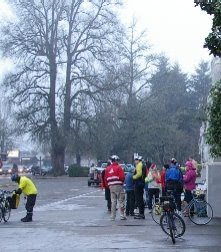 Yesterday morning we assembled out on front of the Capitol. It was cold, foggy, and a little frosty. Some roads had slick patches, and cleats were especially tricky on the frosty steps.

Representatives Jules Bailey and Tobias Read joined us on their bikes! Representative Bailey was especially dashing on his bike with his suit & tie! And Senator Ginny Burdick and Representative Mary Nolan stopped by on foot. Folks from lots of other state agencies joined us as well. It was great to see.

In May or June, towards the end of the session, we'll likely hold another Breakfast at the Capitol - and perhaps with fairer weather we'll see some Salem-area Legislators bike in to work!

The Oregon Bicycle and Pedestrian Advisory Committee was meeting in Salem, and several members of the committee were able to join us as well. It was great to meet and chat with other bicyclists from out of the area. Thanks for joining us!

No new bills on bicycling were introduced this week. At breakfast yesterday, BTA Government Affairs Director Karl Rohde indicated a couple more might be introduced next week.

For links to the other bills see the last update here.
Posted by Salem Breakfast on Bikes at 10:43 AM No comments:

The number of bills with the word "bicycle" doubled this week, from five to ten!

In new business:
The BTA requested a separate bill, Senate Bill 292, for the increase in funding for bicycle paths from 1% to 1.5% 2%. [Note that this asks for a half-percent more than the Governor's bill, HB 2120!]

The BTA also requested a bill, Senate Bill 291, on requiring additional accident reporting when a bicyclist or pedestrian is involved.

The BTA requested a separate bill on school siting, Senate Bill 276, which will require any "school district to consider effect of school site selection on transportation costs to school district and to families of school children." The language of "transportation costs" is not in HB2106. Moreover, HB 2106 amends bonding rules (in ORS 332.176) and provides funding for safety projects; SB 276 amends school siting rules (ORS 195.110). These bills could be complimentary.

Previously Introduced:
House Bill 2106, which contains the school siting language. It was referred to the Revenue Committee.
House Bill 2120, the Governor's big "Jobs & Transportation Act," which contains several small bikey pieces in addition to the bicycle funding increase to 1.5% of the State Highway Fund. This was referred to Transportation with subsequent referral to Revenue, then Ways and Means, where it now sits.
Posted by Salem Breakfast on Bikes at 10:33 AM 2 comments:

Legislators Introduce First Round of Bills that Affect Bicycling

With the first week of the Legislature done, it's exciting to note there are five bills with the word "bicycle" in them! In three of the bills the words appear to be incidental. But in two they are important.

The big news is that the Governor introduced House Bill 2120. Among other things it "increases allocation of State Highway Fund moneys for footpaths and bicycle trails" from 1.0% to 1.5%.

The State Treasurer also initiated House Bill 2106, which will ask that "safety improvements should provide safer alternative routes to schools and may include improvements for pedestrians, bicycles and motor vehicles."

We'll try to track the progress of the bills through the House & Senate, into committee, and through compromise & negotiation.
Posted by Salem Breakfast on Bikes at 10:26 AM No comments:

On February 2nd, City Council will decide whether to approve the request to install signage for the Willamette Valley Scenic Bikeway.

Alex Phillips, Bicycle Recreation Coordinator for Oregon Parks & Recreation, notes that "The Willamette Valley Bikeway has been in existence since about 2005, but not all intersections were marked and the website was out of date." One of her chief projects is to update the bikeway and better publicize it. The signage is part of this project.

About the bikeway she adds

The Bikeway northern terminus is at Champoeg State Park, with its southern terminus at Armitage County Park, north of Eugene. The route passes through downtown Salem. The scenery along the way includes the Ankeny Wildlife Refuge, the Willamette River, Oregon's world famous hops farms and vineyards.

A new brochure, web page and map of the route will be published by State Parks and Recreation this spring.

The cities of Keizer and Albany have already installed the signs. Lane, Marion and Linn County are in the process of installing them.

The council session offers another opportunity for bicyclists to let the city know how important bicycling is to us! All members of council can be reached at Citycouncil@cityofsalem.net.
Posted by Salem Breakfast on Bikes at 11:40 AM 4 comments:

In an exciting addition to their legislative agenda, the BTA yesterday announced they would seek to pass an Idaho style Stop Law this year. Bikeportland also has the announcement and extensive discussion. The BTA also published a FAQ on the proposed law.

Why this? Because starting and stopping a bike is really inefficient and dramatically increases the energy requirements during riding. Moreover, at night, it's not always safest to stop at a deserted intersection. From the FAQ, the law would apply only to stop signs and would

make it legal for bicyclists to treat stop signs like yield signs. A cyclist approaching an intersection controlled by a stop sign, would be permitted to roll through the stop sign after yielding the right of way if there are other vehicles at the intersection.


For more on the BTA legislative agenda see this.
Posted by Salem Breakfast on Bikes at 10:59 AM No comments:

The City of Salem has published a survey to solicit public input on the proposed bridge from Riverfront Park to Minto-Island Park. There are questions about cost, bridge height, bridge design, and likely use. Some of the considerations are purely practical, others are aesthetic.

Take the survey here. It's only 8 questions, has a couple of large photos of proposed designs, and looks pretty easy. Complete the survey and let the city know what you think!
Posted by Salem Breakfast on Bikes at 9:41 AM No comments:

Get Your Bike Commuter Reimbursement/Benefit!

Last October as part of the wacky maneuvering leading up to the passage of the $700 billion bailout bill, Congress folded into the final bill the Bicycle Commuter Act of Congressman Blumenauer. At last, for their low-impact wear on the roads and their congestion-relieving activities, bicyclists can be compensated in the same way transit users are. This pork is especially sweet! It's a great step towards fair recognition of the social goods of bicyling.

The IRS is apparently still working out the details about the way it will be implemented, so you may have to remind your HR staff about getting your reimbursement. There's information buried in the IRS Publication 15-B (2009) page.

[1/28 update: The San Francisco Bicycle Coalition has some additional information here. But it doesn't look yet like there's total clarity on how to implement it.]

What a great way to start the new year!
Posted by Salem Breakfast on Bikes at 11:51 AM 4 comments:

Happy New Year! What a crazy, wonderful, annoying storm we had! Though the rain's not particularly welcome, I was ready for the snow and ice to disappear.

With the Holidays over, we'll be returning to our regular "last Friday" schedule for Breakfast on Bikes. Please join us between 7am and 9am on the Capitol steps on Friday, January 30.

With the Legislature starting, and Transportation funding & infrastructure an important component of the agenda (see bits on the BTA agenda, Governor Kulongoski's proposals here and here, and interesting convergence from a public health angle), it seemed like a great time to visit the Capitol again!

If you joined us in July, you'll remember the Governor biked to work and joined us for a snack! With the weather and all we're not sure whether the Governor will be joining us again, but we hope that bikey State Legislators and staff will be joining us. Scott and Karl from BTA-HQ will be down, and we want to show that bicycling can be an important part of a coherent response to the problems of climate change, peak oil, congestion, and neglected infrastructure. The Governor has proposed to amend the 1971 Bicycle Bill to devote 1.5% instead of 1.0% to bike facilities.

Come on by and show your support!


View Larger Map
Posted by Salem Breakfast on Bikes at 1:36 PM No comments: