Our Salem is a process to update the Comprehensive Plan for Salem. It is linked to the development of a Climate Action Plan. A Middle Housing Plan for compliance with HB 2001 will also be in the mix. Our Salem started in 2018, the Climate Plan in 2020, and the Middle Housing had some preparatory activity in 2019 and will start up again after the State finishes formal rule-making for it.

The Middle Housing code was adopted in January 2022, the Climate Plan was "accepted" but not formally adopted in February of 2022, and Our Salem adopted in July 2022. With those milestones this page will close, and we will start a new one for the next phases. 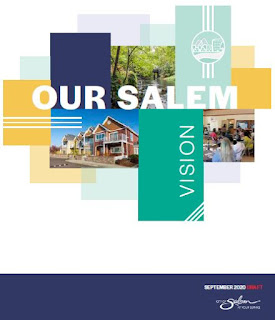 The Revised Draft Plan in February 2021

The "final" draft (which could be revised again)

"Accepting" rather than Adopting the Plan

On Tensions with our Historic Preservation Framework

Background on History of Salem Zoning