Willamette University's Bike Shop and rental program is growing and needs donated bikes in decent shape. Right now they are looking for 10 to refurbish for the fleet. The Bike Shop offers short-term bike rentals of 48 hours, and is building out the long-term program that will offer rentals of up to a full semester.

The Bike Shop started in 2006 and was funded by grants from Willamette University's Sustainability Council, the Community Cycling Center, the Salem Bicycle Club, and many others.

If you have a bike to donate, please use the contact form for a description of the bike and your contact information.
Posted by Salem Breakfast on Bikes at 11:02 AM No comments:

City Councilor Kate Tarter and Kimberly Allain, Executive Director of St. Vincent DePaul, together invite folks who are interested in talking about the possibility of creating an organization to recycle bicycles here in Salem. In Portland, the Community Cycling Center has been doing this since 1994, and it is a model nationwide.

If you are interested, please come to the meeting!

Salem is a "Bicycle Friendly Community"!

Recently the League of American Bicyclists named Oregon as the fourth most Bicycle Friendly State. For a long, long time, though, we've looked at the list of Bicycle Friendly Communities in Oregon, and wondered where was Salem? Ashland, Beaverton, Bend, Corvallis, Eugene, and Portland were all ranked, with Portland leading the nation, but the State's Capital was missing. It was an annoying omission. Bicycle Advocates wondered, why was the Capital City so far behind its municipal peers?

Well, maybe we're not so far behind! Just yesterday the League announced Salem merited a "Bronze" citation as a Bicycle Friendly Community! It's an important accomplishment and measure of progress. By national standards, maybe Salem isn't behind. The League cited Salem's achievements and progress in engineering and encouragement, leaving education, enforcement, and evaluation as needing work.

Of course there is much to do! By the standards set in communities like Bellingham, Olympia, and Seattle in Washington; Davis, Folsom, Palo Alto, San Francisco, San Louis Obispo, Santa Barbara, and Santa Cruz in California; and communities like Corvallis, Eugene, and Portland here in Oregon, Salem still lags behind. There are significant structural elements in Salem's roadway system that make bicycling difficult and connections counterintuitive. Hopefully we can work on those in the next few years. Good bikey stuff is coming out of the Vision 2020 conversations. The League will follow up with some specific recommendations for us to work on so we can achieve Silver or even Gold in 2012, when we will reapply.

So when you join us tomorrow morning for breakfast, raise your coffee up and toast the bronze! (And join us as we work towards the next step of Silver or Gold!)
Posted by Salem Breakfast on Bikes at 10:02 AM No comments: 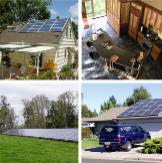 While the focus here is on our Breakfast project, sometimes some other kind of bike fun comes along that's too great not to notice. The Willamette Valley Green and Solar Home Tour on October 4th is one of them. It's a "self-guided tour of several green and solar homes in the Salem & Silverton areas" that will be open most of the day.

Most interestingly, it has rational pricing! The ticket fee is per car and that will encourage car-pooling. Even better, bicyclists are free! So basically the pricing enacts a carbon tax. How great is that? I don't know how bike parking will be, and how home owners will feel if it rains - we bikey folk will be wet! (Though there would also be fewer bicyclists.) But I'm happy they are trying this, and I hope others will follow!

Pre-registration is required, so do click through the link check out the details. Hit me with an email if you are going by bike, and perhaps there will be enough of us that it makes sense to organize a bike ride!
Posted by Salem Breakfast on Bikes at 11:33 AM No comments:

Now that we've got a routine established, we can plan the Breakfast sites farther out! (Though with the Holidays, we may change some of these...so do check back!) Here are the Breakfasts on Bikes for the fall and winter:

November 28 - By the AC Gilbert House, under the bridge. Here's what it looked like last time.

December 26 - For Boxing Day, we'll be back at Winter & Mission.

We hope in January to have a special edition for the Union Street Bridge Opening. Our regular January Breakfast on the 30th will complete the round and be at 12th & Chemeketa.
Posted by Salem Breakfast on Bikes at 3:12 PM 1 comment:

For September's regularly scheduled breakfast, we'll be at 12th & Chemeketa, on the south side of the intersection on the bike/ped multi-use path. Bike counts we've been doing this summer suggest Chemeketa is the most popular bicycle corridor in the city. Passing through the Court-Chemeketa Historic District, the route is scenic, has auto low traffic, and is a perfect candidate for upgrading to a formal bicycle boulevard!