Breakfast on THE Bridge - Wrap

Even though it was a little cool out at first, the sun did shine, and Friday's breakfast represented perhaps the first "fair-weather" breakfast of the season!

We served 34 cyclists in addition to the crew, and several were new to breakfast. It was great to see some new faces!

Everyone had good things to say about the bridge, and it's clear it's on it way to being loved!

Being on the bridge for the first time, it's a great moment to give another shout-out to Portland's Breakfast on the Bridges. They provided help with the template and inspiration when we first started organizing Salem's B on B! At the Bike Summit, we talked to some folks in eastern Oregon, and we hope they'll start doing their own version. Spread the bike love! 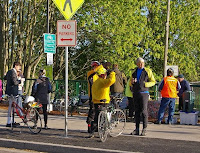 Thanks to Tim Ehlers for the photos!
TRE Photography
www.timehlers.com
trephotos.blogspot.com
Posted by Salem Breakfast on Bikes at 9:55 AM