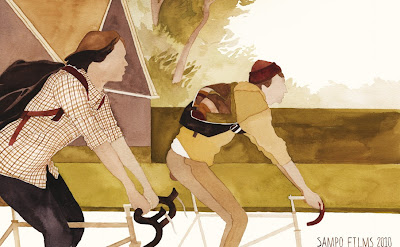 Thursday, June 17th meet filmmakers Nick Peterson & Mary DeFreese and bike to the High Street Cinema for a showing of the bikey-est film to hit Salem since Breaking Away! - Field Guide to November Days.

They filmed by bike, featured bikes in the film, and are touring by bike - can you get any bikier?!*

Matt and Natalie, recently separated from each other, resume their relationship after a chance meeting. Passion clouds their perception and they soon fall back into destructive patterns. Further complicating the situation, they are each exploring ideas about their own mortality. After time, jealousy and problems with communication resurface and they separate, once again. To cope with the loss, Natalie isolates herself and experiments with a radically different place in society. Matt finds solace in his friendship with Christian, who is gay, but is confused by their companionship and begins to question his own sexual identity.

Field Guide was made entirely by bicycle (except for a single drive to the coast) and premieres May, 2010.

Starting June 10th, 2010 Mary and Nick will be biking over 1500 miles from Vancouver, B.C. to San Diego, CA and screening Field Guide along the way. Details for the 10 city tour are here.

The all-ages Salem fun starts 5:30pm on the 17th at Clockworks Cafe. Get a cup of Stumptown coffee, meet the filmmakers, and then get ready for a short ride at 6:30pm through downtown to the old Salem Cinema screen, now called the High Street Cinema.

Last month the film premiered in Portland, and here's the Merc, Willamette Week, and the Oregonian.

(For an added bonus, lead actor Joe Haege of 31 Knots recently announced that he'd joined an enlarged version of Menomena for touring. Here's a musical treat, Wet and Rusting (mp3) from Friend and Foe.)

*Well, we can think of the maximum bicyculum: 100% fixies! That would push it over the top.
Posted by Salem Breakfast on Bikes at 1:00 PM

Today's Oregonian has a nice feature on the filming!