From Rail to Bail: Transit, Courthouse Square, and Disappearing Choice 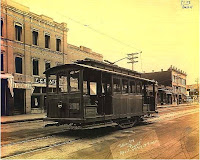 Cherriots has been in the news a lot lately. From having to discontinue Saturday service to needing to relocate the transit mall, public transportation in Salem isn't exactly enjoying a banner year.

100 years ago Salem enjoyed a pretty good public transportation system. Streetcar lines covered much of the city, and several railroad lines filled in the gaps.

More than this, no single transportation choice dominated minds or streets the way the drive-alone trip dominates today. Back then, horses, bicycles, streetcars, and a small number of autos filled the roads. If the past has a lesson, it is not the specific technologies behind the choices, but rather the robustness of possibility and diversity of choice. Today, every time we seem to make a move towards diversity, something arises to hinder true choice.

Here you can see the streetcar network in black circa 1920, at the peak of service. Lines went out south Commercial, 12th street, State street, Chemeketa and Center Street, 17th street, Summer street, and Fairgrounds road. The Southern Pacific; Oregon Electric; Geer; and Salem, Falls City and Western railroads are in blue. In red is marked the intersection of the Falls City line on Union Street and an Oregon Electric branch on High street.

High and Union happens to be at one end of the proposed relocated transit center.

With the north Broadway development - NoBro, or The Mission District, its name hasn't quite settled yet - nearby, with the Chemeketa Center for Business and Industry, and with the Marion Parkade as a possible park-n-ride, the location is not bad.

The Courthouse Square fiasco presents all with a range of choices from bad to badder, and all things considered the responses have been creative and helpful. The initial transit mall on Court street by the Capitol Fountain was an inspired back-up plan! Unfortunately, the State of Oregon was not a fan of it, and some of the grassy area also appeared to pose ADA issues in the Fall and Winter. The transit mall moved to Cottage street, and now is planning to move a third time.

It's important to note that there are significant constraints from budget, location and logistics. Even so, sne aspect of this third plan for the transit mall is bad.

According to Julie Warncke, Transportation Planning Manager with the City, it is not likely there is room for bikes:

Staff is looking for ways to safely accommodate bicycle traffic, but it may not be possible. The buses will travel contra-flow, with just enough room to pull into a center island and have one bus pass behind it. The boarding and alighting will take place in the center island. With the combination of bus traffic and contraflow, we have not yet been able to identify a safe way to accommodate bicycle (or automobile) traffic. There is not enough room to stripe in a bikeway as was done at the Rose Quarter Transit Mall.

Why does bike flow matter? Here's a view from the Union St. Railroad Bridge looking east down Union. The first traffic light is at Front, the second is at High, on the east end of the proposed transit mall. 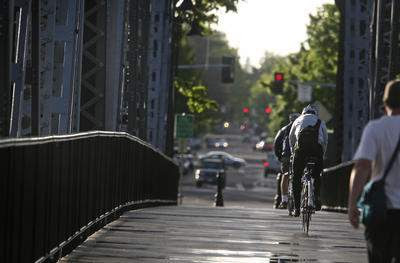 (Transit mall map and photo: Statesman Journal)
For people walking and biking, the most natural movement on or off the bridge is straight down Union. There used to be a rail line there, after all!

The City's current preferred route, however, uses the Court Street crossing into Riverfront Park. This forces bicyclists into the crosswalk, and into a two-cycle traffic light (one phase for each direction of front). 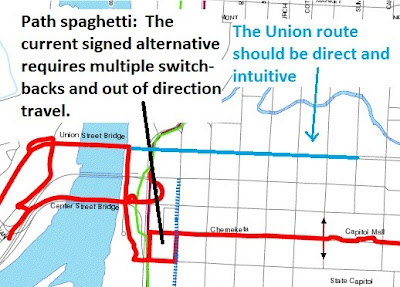 Whether by design or by accident, the City of Salem is undertaking planning choices that reduce access to the Union Street Railroad Bridge. By making it more difficult to reach on foot or by bike, they make it less useful as a transportation alternative to the two auto bridges. Between the decision to close State Street at the Carousel, to widen Wallace at Glen Creek, and now to close off Union to bicycle traffic, we are slowly strangling the bridge to all activity except drive-and-bike recreation. Instead of eliminating choices, we should be creating and promoting choices. Surely we can do better!
Posted by Salem Breakfast on Bikes at 7:30 PM