Autoism and the Disembodied City: Counting Cars instead of People

As some have lamented the city emptied, immobilized, and impoverished by the pandemic, they have used the lack of cars rather than the lack of people as the primary index of desertion and loss.

Counting cars instead of people is a great error of our autoism. And the confusion of cars for people starkly illustrates the problem of defining downtown as a suburban-style drive-to destination.

A special point of vulnerability for downtown is its car-dependent autoism. Even with the job losses and income loss, downtown would be more resilient if there were more housing and more people living there. It would also be greener with fewer emissions.

If we had more housing downtown, there would be more people to support restaurants shifting to curbside take-out only, for example.

This is why a central claim here is that the fundamental problem of downtown is the lack of housing, not any lack of parking or auto capacity. Simply making downtown into a larger drive-to mall doesn't solve anything and instead reproduces the conditions for another round of difficulty and even crisis. It just kicks the can.

Elsewhere in the world, busier sidewalks may constitute a more difficult arena for proper physical distancing, but they also are evidence for more resilience and vitality.

From the New York Times:


Now the choreography of the streets has taken on higher stakes. It’s the difference between health and sickness, life and death. Inside we’re alone. Outside, a new alertness is in order, one that demands a deep connection to the position and movement of the body — or proprioception, sometimes referred to as the sixth sense....

That feeling and control of where we are in space is important right now; dancers, through years of training and sensorial alertness, grasp this inherently. If this pandemic is teaching us anything, it is that we need to return to our bodies. Life is precious, and so is movement.

“It is appalling how we disuse the body,” the postmodern choreographer and dancer Steve Paxton once said. “Dance reminds us about that. Dance explores some of the physical possibilities; dance refocuses our focusing mind on very basic existence, and time, space, gravity open up to creativity. This seems to me a reminder of nature, of our natures.”

Whether intentionally or not, this "choreography of the streets" invokes Jane Jacobs' famous description of sidewalk ballet on a lively city street.

Without getting too metaphysical, our autoism is in part a denial of the body. With speed autoism denies spatial distance (even as it consumes vast amounts of physical space in parking and roads), with gasoline combustion it denies the physical effort it takes to move in space, and with sheet metal carapaces it denies the ways we connect to other bodies and people in space as well as giving the illusion of invulnerability. Cars are isolating and alienating. People don't like long commutes for a reason. Even short commutes are not an unmixed pleasure in cars. Cars are also the greatest local source of greenhouse gas pollution, which offers long-term threats to our bodies and to our society, and cars directly kill and injure people in crashes.

Cars are tools. We overuse them and we've created an idolatry of them in our autoism. Maybe the pandemic will prompt some clarity on them if we can focus on people rather than on cars.

Kaiser Permanente yesterday ran a full-page ad employing empty highway spaghetti to signify empty urban streets and sidewalks. This might be worth coming back to, especially as Kaiser has supported walking and biking. The focus on passing-through by car rather than on a place with people is striking. 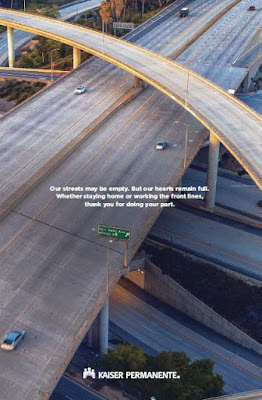 While they show empty streets, nearly all of them are framed skillfully to show empty sidewalks and plazas also, and to give them equal weight to the streets. They show the absence of people, not just of cars. It's different visual rhetoric around public space, and might be worth more attention. Very interesting.
Posted by Salem Breakfast on Bikes at 12:01 PM

Email ThisBlogThis!Share to TwitterShare to FacebookShare to Pinterest
Labels: COVID-19

Also added a note about a photographer in NYC, who has developed the "empty street" trope into something much more interesting.