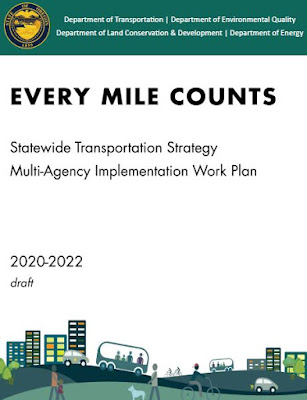 When I first learned about the "Every Mile Counts" initiative it was in the context of the ODOT Climate Office, and I understood it as primarily an ODOT project.
That was not right. As a commenter pointed out, and as had become clear when I read the cover letter to Governor Brown, the project is a multi-agency collaboration. ODOT is one of the four principals, but is not necessarily the lead formally - though it is possible that they will be something of a de facto lead because of the massiveness of their bureaucracy.

So right off, that points to an avenue for comment in the survey on the work plan.

One need to highlight then is: Make sure ODOT commits to implementation and commits to VMT reduction. Make sure ODOT doesn't sabotage, slow walk, or otherwise water down the project. They are nearly certain to need to be pushed. (And a little more on that below.)

Already in the work plan is worrisome language about "balance."

And besides, doesn't our Pandemic and its Recession/Depression point to profound failures in our current economic arrangements?

So another point for comment is not to let the false idol of "balance" with economic development undermine climate action.

As for the work plan, again, it leads with "reduce vehicle miles traveled per capita." That is great and praise-worthy, but it could be strengthened also to "reduce total vehicle miles traveled," since that is the part that actually reduces the carbon pollution sent into the atmosphere. We could have significant per capita reductions and still increase total emissions, and that would count as a failure, not as a success.

Still, in the work plan specifics are specific. The plan has a granular level of detail totally missing in the Statewide Sustainable Transportation Policy and other framework documents. Maybe this is because they are different genres of document, and it is wrong to expect them to have the same level of detail, but as I read it this detail is also a mark of seriousness. There is action coded here, not just words. This document actually intends to accomplish something, not just give the appearance of doing something.

One of the recommendations is a Statewide Trip Reduction Policy, and they are also realistic about it: "The rulemaking effort is likely to be time and staff intensive, and is likely to be controversial." This is great! This is reality-based analysis and planning! That also means it needs additional support. Supporting work for a Statewide Trip Reduction Policy is another item to comment on, then.

Parking reform is another component worth particular support.

All of the projects under "Consider GHG in Decision-making" are worth support, especially as they say they will "take a significant level of effort."

Additionally, one omission on "Consider GHG in Decision-making" is ODOT itself. Ask for every highway project to be evaluated for GHG emissions and induced demand. Why isn't ODOT evaluating their own projects? GHG assessment isn't just for the MPOs!

At the OTC meetings this month, they are looking at a draft strategy for 2020-2020, and it is silent on VMT reduction and GHG reduction. It frames up "carbon reduction" as only "providing greater access to...a broad range of mobility options" and says nothing about actually making reductions to carbon pollution. It's all very theoretical, potential, discretionary, and optional. At the highest level, ODOT is not yet very engaged in the project, especially in measurable ways.

A good carbon pollution strategy will need stronger action and more decisive engagement from ODOT. They need to know "Every Mile Counts" isn't a directive on counting more lane miles!

So here is what I see particularly as worthwhile avenues for comment:
Again:


You write: "Additionally, one omission on "Consider GHG in Decision-making" is ODOT itself. Ask for every highway project to be evaluated for GHG emissions and induced demand. Why isn't ODOT evaluating their own projects?"

Recall Executive Order 20-04 which included this: "Evaluate the GHG Emission Impacts of Projects as Part of the STIP Planning Process ODOT is directed to develop and apply a process for considering GHG emissions in making STIP decisions, and produce a report by June 30, 2021."

The requirement from EO 20-04 likely came too late to be included in this draft of Every Mile Counts.