The Salem Downtown Vision 2020 Bicycle and Pedestrian Connections Group meets on the first Wednesday of each month.

At the Bicycle and Pedestrian Connections meeting yesterday we had a wide ranging conversation about Commercial Street through downtown, making room for bikes at the bathrooms on the Capitol Mall, the nature of Urban Renewal Tax Increment Financing, and bike parking and other downtown amenities. We learned that City Council did approve the signage for the Willamette Valley Scenic Bikeway. 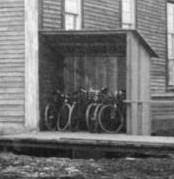 We also talked about bike parking. Wouldn't it be great to see some covered bike parking downtown? Here's bike parking in Salem circa 1909 at Colonel J. Olmstead's Steam Laundry on South Liberty Street. 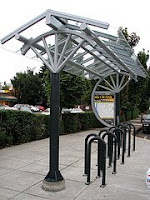 Here's some contemporary covered bike parking in Portland (photo: Fussganger). Note the See and Be Seen ad for adequate bike lighting! (More on Portland's campaign here.) Wouldn't it be great to see something like this in downtown Salem!

On March 31 from 5:00-7:00 PM there will be a Community Forum, "Celebrating Success," at the Salem Conference Center. Hopefully we'll get to see proposals on several of these things!
Posted by Salem Breakfast on Bikes at 12:05 PM

Keep up the great work! Those new bathroom buildings drive me crazy- it's so difficult to ride through there now. It would help if they would flatten the curbs around either side of the buildings.

That, along with some signage and taking out or moving a couple of the bushes, is the plan! We met with representatives from the City of Salem, who retains a right-of-way along Chemeketa, and Oregon Parks and Recreation, who manages the Capitol Mall State Park. The work is not too complicated, but there's some wacky jurisdictional stuff. Once we get that ironed out, we'll have a more substantial update on this.