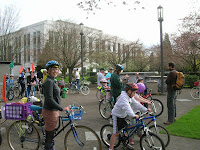 Midway through the inaugural Kidical Mass ride yesterday, riders take a breather on the Capitol Mall.

We had a great turn out! About 50 people gathered in the parking lot and we talked and chatted and admired the kids showing off helmets, bikes, and other gear.

The ride kicked off in Bush Park, looped through the park and South Salem High School neighborhood, headed north to the Capitol, and then returned.

Stephanie Knowlton wrote a great piece in the Statesman. She noted

Neighbors waved and flashed thumbs-up signs as the group cycled through the streets surrounding Bush park....

Halfway through the ride, Aurora Gutterman-Johns, 4, fell asleep in a seat behind her mother, Jennifer Johns. Johns was excited about the turnout and the relatively flat route, she said.

"It's clear that people in Salem like these community-building events," she said. "There's no reason Salem shouldn't have the same sorts of events that Portland and Eugene have."

Update - here's the Kidical Mass Salem wrap, with lots of photos!
Posted by Salem Breakfast on Bikes at 8:37 AM