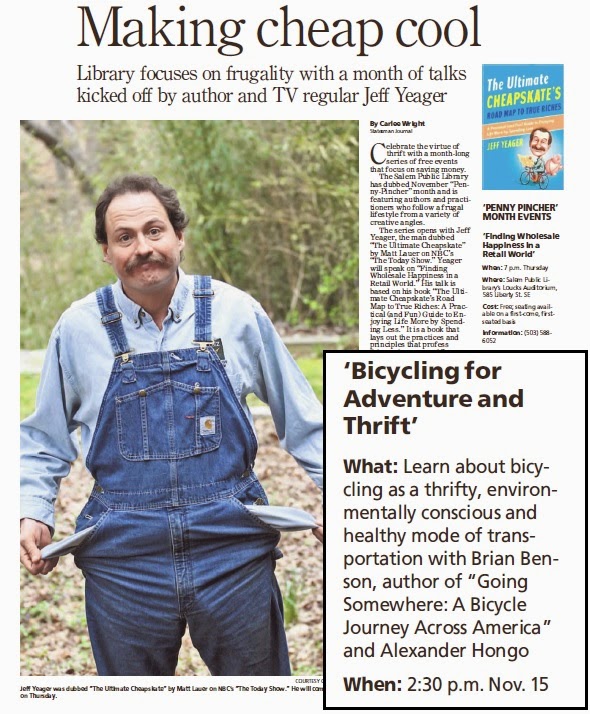 As we've seen and heard about with the audiences for recent talks by Jeffrey Tumlin, Gil Penalosa, and James Sallis, advocates are doing pretty well reaching the choir, but there's great difficulty yet reaching and persuading those not already converted to the virtues of urbanism, public health, and the role of walking and biking in the mix. Mostly we're all just talking to ourselves and with a few like-minded friends. It's a different version of the echo-chamber.

So the Library's got a series of talks that comes to bicycling from a different angle: How to save money.

Maybe this will be a way to reach a different set of folks and to enlarge some of the conversation about bicycling and transportation!


The Salem Public Library has dubbed November “Penny-Pincher” month and is featuring authors and practitioners who follow a frugal lifestyle from a variety of creative angles.

The series opens with Jeff Yeager, the man dubbed “The Ultimate Cheapskate” by Matt Lauer on NBC’s “The Today Show.” Yeager will speak on “Finding Wholesale Happiness in a Retail World.” His talk is based on his book The Ultimate Cheapskate’s Road Map to True Riches: A Practical (and Fun) Guide to Enjoying Life More by Spending Less.

Later in the series is a bike talk.

Bicycling is a thrifty, environmentally conscious, and healthful mode of transportation. But it is also a transformative activity. Two speakers, Portland author Brian Benson and Eugene Bicycling organizer and mechanic Alexander Hongo will present different aspects of this seemingly simple, yet life-altering practice.

Brian's talk will be about going on longer trips, but Alexander will be talking about biking in the city:


Alexander Hongo will present a “How to Bike Commute” clinic, featuring tips on how to set up for success with equipment, clothing, methods, and mindset. He will also discuss basic preventative bicycle maintenance to reduce the cost of repairs.

Alexander Hongo is a mechanic at Paul’s Bicycle Way of Life and a teacher at the University of Oregon Bike Program in Eugene, where he lives with his partner, their dog, and about a dozen bicycles. In his free time, he contributes to community bicycle events like Sunday Streets, the Disaster Relief Trials, Moonlight Mash, and the Bicycle Music Festival.

The timing of this is obviously not optimal, but since it's part of a series rather than a stand-alone, that's not really very relevant.

Still, starting to bike places is best in the fair weather when rain and cold isn't a distraction, bother, or worry. So I don't know how effective a "how to" will be in mid-November. But maybe it will plant the seed for something in the spring.

There's also our diversity problem: White Dudes in Spandex. Maybe Yeager's principal audience is men looking to downshift, but the library has lots of families, too, and our prevailing arrangements - unfair as they are - still typically have moms chauffeuring the kids. Moreover, Latinos are a hugely underreported proportion of people who bike in Salem.

All in all, I'm not sure the talk will reach beyond the "usual suspects" for whom bike talk is already catnip. But it's a worthy try, and maybe we will all be surprised!

Bicycling for Adventure and Thrift, 2:30 p.m. Saturday, November 15
Posted by Salem Breakfast on Bikes at 12:01 PM

A bit of irony here for me because from where I live - less than 2 miles from the library - it ought to be easy to bike there. However the most direct route goes along Pringle Parkway (the section of Rt 22 between 12th Street and Front Street). Even thiough there are bike lanes, the bike lane pavement is mismatched with long seams; it's a truck route; traffic is heavy, fast-moving and swoops around curves grazing the bike space.
SBOB recently described the hazards of biking on the east end of Wallace Road, bike lanes notwithtanding. I feel the same way but rarely need to be on Wallace Road. Pringle Parkway on the other hand, is the most direct way from where I live to the library, city hall and businesses on the south side of downtown. To get to those places I've jury-rigged routes cutting through Willamette University or Salem Hospital, taking alleys and going through the parks along Pringle Creek. I often end up walking the last block or so rther than ride against traffic on a one-way street.
I'm an experienced urban cyclist. I ride on Chemeketa Street all the time to get to the central or north side of downtown and use the bike lanes on 12th and 13th to South Salem or State or Center east of downtown with no problem. I commuted to work and did errands by bike and biked recreationally for years in and around Boston, MA. I still bike there when I go to visit my son. But Pringle Parkway freaks me out. Does anyone else feel that way about it?

Agree! Biking to the Library and City Hall ought to be intuitive and straight-forward. As you say, it is anything but!

In addition to Pringle Parkway being awful - the places where tires have worn down the white bike lane pavement striping as drivers take corners too tightly testify directly to this - on Liberty and Commercial the bike lanes are always the outside right-hand lane, and so you have to use a variety of ad hoc solutions to move to your left to reach the "center median" on which the Civic Center is located. And the car traffic is usually pretty zoomy. Not a comfortable environment at all.

City bike maps show blue lines for bike lanes and it looks like there's easy connectivity. But the on-ground truth is otherwise.