Last night the City and project team shared some results and preliminary design concepts from the survey this winter.

They've published a full report on the survey, and I want to drill into one small portion of it.

None of the elements in the survey that directly involve transportation were ranked very important. Car parking and transit ranked right in the middle.

The elements that specifically involved travel on foot, "landscape" and "campus circulation," whether at trip-end after a car or bus ride, or as a full walking trip, were ranked very low.*

A lot of this is probably an artifact of the way we conceive of a trip to the Police Station as generally the product of misfortune and hopefully something that happens to "someone else" rather than something we might ourselves have to undertake - voluntarily or not.

But it also represents an autoist bias and the annihilation of space. The building is out there abstractly in space, someplace we drive to, and not at a particular block just north of downtown where we might want a lively urban fabric. Ingredients for such an urban fabric might get value-engineered out as decorations or frills.

But they are not merely this. Even if you drive to the new station, the way the project greets your eye and body when you get out of your car is your first impression, and can either reinforce the dread or act in countervailing ways to dispel some of the dread. There are ways the project should act on mood, not merely function, and be a creative power for justice. Security is not just about punishment, control, and force, though it will always be implicated in these. There is also a generative side to justice as a central ingredient in a community's flourishing, and we should want to attend fully to it.

The two most popular community amenities attest directly to creation and generation, in fact:
It is good that the project team is aware of the way a plaza on Division Street is useful and does not propose just to plop down a bunker.

I'd still like to see more attention to the back side and the way the project relates to the creek. That's a big resource that deserves more attention.

But in a very broad and preliminary way, the way the project addresses Division Street and the corner with Liberty looks promising.

(As more parts of the Open House materials are published, there might be more to say.)

* "Campus circulation" is at least a little ambiguous, and since it suggests a campus like the Civic Center/SAIF area, or Willamette, or the Hospital, or Capitol Mall, respondents are right to rank it low. We don't need  more of the recessed buildings with lawns and path systems that are disconnected from the sidewalks.

In that way we don't want a "campus." But "campus circulation" does imply walking circulation, and that's the sense I wanted to dwell on.

The summary in the paper has an odd emphasis. 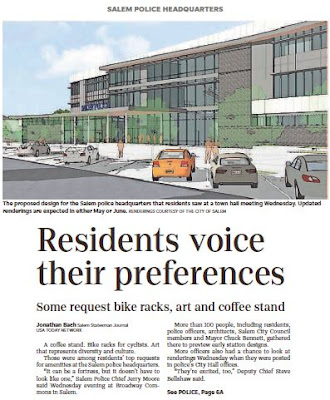 Bike racks, art, and coffee were not the highest preference. Invoking bikes and coffee seems maybe a little click-baity.

A "bike repair station" was the 4th ranked amenity, behind the safe custody/sales transfer concepts and a "law enforcement memorial." A "community coffee shop" is listed only under "other: please describe."

Here are the full rankings. Art comes in at number six.

Added a few comments on the paper's summary and overall sense of priorities.

I attended the Open House and was impressed with how much of the design is geared towards the community. The open plaza is a good example of how they wanted to create a usable space for people rather than cars. Of course, part of the motivation was that they did not want to create an opportunity for a car bomb or some enraged person in a truck to get too close to the entrance of the building. There will likely be some barriers controlling access embedded in the landscaping design.

But the plaza is not to be just empty space, but a place where community activities take place. Things like bike rodeos/training for kids. Halloween dress rehearsal parties, awards ceremonies, basketball tournaments, coffee with a cop were things I heard mentioned. Plus, they could host various different community fairs and informational events.

The Community Room inside is quite large at 1800 sq feet and they are hoping to have doors that can open up the lobby space to both the conference room and the plaza. This could make for a very useful area not unlike Anderson room at the Library.

Security issues of course are still to be discussed and worked out, but I think they are really looking for the Police building to be not just for the police, but for the whole community.

I like how they are including some openness to the creek. I can see it becoming a pedestrian path that is preferred over the sidewalk by the busy street, if there is something worth walking too.

The whole complex of new development that is being built which in my mind includes the MAPS building, the Police building and the future UGM building has the potential for raising the viability of the block to the south being ripe for redevelopment too. I would hope to see some housing come into the area due to the proximity of the police and the access to downtown.

I did talk with the planners about the need for better pedestrian, bike and bus access. Right now the closest bus stop is a block to the east. But this can be changes by working with the Salem Keizer Mass Transit board. They tend to go where the riders go, so with a lot of employees at the new building, they likely would consider a one block move.

The only flaw that I see...and I know this is hearsay on a bike blog...is the lack of parking for events for people who have mobility issues. There is likely to be only 2 handicap parking places on the street. Since this is something near and dear to me, I suggested they look into how to create temporary handicap parking for events. But then this pushes more people into having to park at the Marion Parkade and walk to the event. Although a creative planner might create shutter service for some events. With a community room that might seat 200 people this could be a real need.

But all in all, as a person who was worried about design as well as cost, I am feeling pretty good about the track that the architects are on with this building.

As an aside, the total square footage of 106,000 sq ft does allow for some usable space if the BIG ONE hits before City Hall is replaced. This building is going to be designed to withstand a 9.0 earthquake and be 100% functional within 24 hours. City Hall will pancake, so there will need to be a place for basic functions to operate in the aftermath.