I know it's orchestrated PR, but it's still pretty great to see the Chief of Police tear into the old building and to have something of a demolition party for the new Police Station. 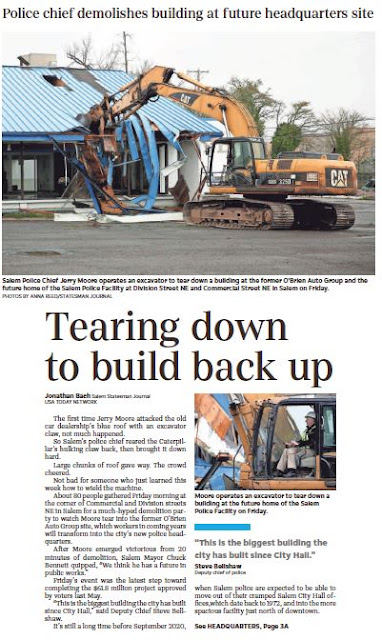 It's relief to have the decision made and to be able to move on with making the project as fine as it can be.

One element to consider is how the street front along Division might be improved. The construction cam the City's set up will give an excellent view on the corner of Division and Commercial and a half-block section of Division to the alley. 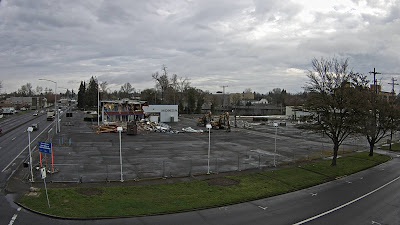 This morning's view, with no parked cars at all, shows starkly how inert this area is at the moment.

Even though the needs for building security add constraints, within those limits there are opportunities to make a more lively sidewalk and create some kinds of public space here.

Whatever is the final design, it is nearly certain to be more interesting than a sea of parked cars and the suburban boxes recessed deep in the lot. 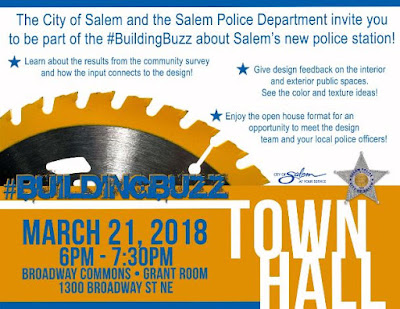 Wednesday the 21st there will be an Open House on the project, and when materials are published it will be interesting to see where the design is going.

Things that I'll be following most closely are:

1) How does the project team protect the corner of Division and Commercial while at the same time ensuring that it does not become the corner for a sterile bunker? Will the crosswalks here get any better? Can the sidewalk along Commercial be improved?

2) What happens with the traffic circle on Liberty and Division?

Hopefully when the City comes to design a traffic circle for Division and Liberty at the new Police Station, it won't be as complicated as the one in Springfield on Pioneer Parkway! It's got way too many things going on. There's a Rapid Flashing Beacon to mark every crosswalk and it's like a Rube Goldberg machine for transportation.

In a formal assessment, ODOT suggested it was a real mixed bag:


In the summer of 2006, the city of Springfield, Oregon installed the first urban multi-lane roundabout in the state. It was hypothesized that after installation, speed variability on approaches to the intersection would decrease from the values with the previous signalized intersection. It was also hypothesized that the initially observed high incidence of driving errors associated with specific areas of the roundabout would decrease over time. Before and after speed recordings of approach roads to the intersection revealed a significant increase in mean speed, but no consistent change in speed variability. Some design features caused initial confusion amongst drivers negotiating the roundabout, but the number of observed incidences of confused behavior declined over the first six months of operation at a rate that fit a classic logarithmic learning curve.

Note that it increased mean speeds! Whether it was helpful for people on foot or on bike was not deemed important to mention in the abstract.

Anyway, for the final design of our roundabout here, it will be important that non-auto travel be included as central features and not merely shoe-horned in as secondary considerations.

Especially if any kind of community gathering space is included in the final design for the Station, either indoors or outdoors, we should be able to walk and bike to it easily.

3) Will the main public entry relate to the traffic circle and corner, sidewalk and will it embrace the creek at all?

The Liberty side is really the human-scaled block front, and the intersection with Liberty makes for a better focus than the corner of Commercial and Division.

Police might very well want a "business" entry and set of driveways on Commercial, but the main public facing elevation and architecture should be massed on the corner with Liberty.

So how will the project team be envisioning this? Can we have a main public entry that relates to the sidewalk and not principally to a parking lot, even a small one?

In the most recent concept plan, there's a back driveway along the creek. Is there any way to have the building and its walks relate more strongly to the creek, and not have a driveway and parking be the primary feature?

Previous notes, including multiple sites and that debate, up to the successful bond measure are here. New notes with the car dealership site settled are here.

Here's a detail from a concept drawing presented at the Open House.

The open plaza on the corner of Liberty and Division looks alright. It'll be interesting to see more and hear what others have to say. Still have reservations about the creek side, but the way it addresses Division seems ok. Generally that seems like a positive start!

(updated with clip from Open House)