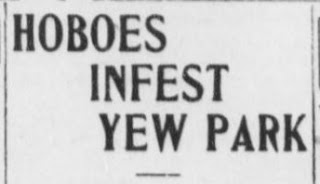 Update: It has been postponed, new date TBD.

The Mill is cranking up the "History in the News" talks again! They've been on hiatus for a little over two years, and it's nice to see the talks start up again. "State of Homelessness: Past and Present" will be on March 11th at 5:30pm, the Willamette Heritage Center.


Homelessness has become increasingly visible on the streets and in newspaper headlines, state and nation-wide. This panel considers the histories of people experiencing homelessness and the long-term history of public responses to homelessness in order to understand current conditions.

Has the experience of homelessness gotten worse, or simply more visible? How have media representations of homelessness changed over time and how do these affect public opinion and policy? What approaches to shelter and support people have been equitable and effective in the past and in other places?

History in the News is free and open to the public. Food will be available for purchase from TAO: Taproot Annex One.

Here's an episode from just south of the Mill, in Yew Park near Deepwood. Many of the attitudes have endured, but it also points to ways that we simplify in a monolith of "the homeless" (like the false monolith of "the bike community" and most of the other abstractions like that!) and miss differences among people who lack shelter for one reason or another. These were probably riding the rails, but it was the theft that seemed to be the real problem. In addition to the railroad, another important physical locus would be the Poor Farm, but there would also be shacks and tents and other camps distributed around town, and various levels of involvement from families, churches, and other charitable enterprises. I don't know if the history talk will be more about attitudes in general or if it will drill into specific Salem history of camps and attitudes. If the latter, it will be interesting to see what emerges, as this is not something mentioned much in the standard history bits of Salem. The promo tile for the Mill's talk uses what is I think an image of the "hotel de Minto," and it will be interesting to learn if they read that ironically for the jail like the "hotel de Gibson" signified or understand it a more benign way.

Yew Park for several days has been infested with a band of 17 hoboes, and they defy police and citizens. A number of petty depredations have been committed, hut the fearless gang of semi-outlaws held the fort and feast on the gardens, orchards and hen-roosts of the well-to-do Park people.

About a week ago the band made their first appearance in the peaceful suburb and established headquarters in an inviting and sheltered spot. Fancy friers, mealy spuds and luscious fruits commenced to disappear, but the strangers waxed fat and grew sassy.

Sunday morning their pilferings and general demeanor became unbearable, and the police were notified. A call from an officer resulted and the hoboes promised to move camp. They packed up their belonging, consisting of a few blankets, tin cans, and other light utensils, and left. The neighbors took a long breath, and thought the matter a closed incident, but imagine their surprise when the impromptu hotel was reopened late that evening.

A man, looking for his cow about dark, approached the camp, when he was assaulted with a rock, and stunned by a heavy blow on the head. A general call will be issued for the entire police force today, and they will go to the Park to "dare and do," as they are determined to drive the outfit out of the city, or introduce them to the calaboose and rockpile.

The gang of hobos who have been making Yew Park their headquarters for some time past are not likely to disturb the peace loving residents of that community again with their petty thefts very soon.

Special Officer James Penland, of the 7th ward, last night with patience exhausted and blood In his eye, determined to rid tho city of these vermin who have been complained of to him so long and loudly by Salem citizens. Loaded for bear he started for the scene of action with the determination to do or die and from the result it is to be suposed that it was more "do" than die. When he hove in sight of the camp, which was a veritable "robbers' roost" he could smell the savory odors of, in tho vernacular, a "mulligan," composed of chickens from the neighboring roosts, mealy spuds and vegetables of all kinds and descriptions, added to which were many dainty bits beggod or pilfered from the tables of the good housewives of Yew Park. When the majestic aim of the law appeared in their midst, the gang, with much grumbling and bewailing of fate, submitted to the inevitable and meekly accompanied the officer to the city jail, where they remained, and dreamed of the feast which was still simmering over the fire in Yew Park uneaten.

On account of a leak in the water pipe in the jail this morning the gang was turned loose with a reprimand, upon thei promise that they will leave the town and return no more.

And a few days later on the 25th, a letter to the editor:


Ed. Journal: As a resident of Yew Park, I desire to say a few words concerning the treatment we are receiving at the hands of the city officers. About a week ago Special Officer Penland arrested eight hoboes who were camped in Yew Park. These fellows had lived there several days, and were very independent and impudent to the neighbors. They helped themselves to chickens, potatoes and wood, in fact everything eatable suffered from this gang of lazy marauders. The next day they were turned loose by tho police judge, with the warning to get out of town. They immediately returned, and it was necessary for the officers to again serve notice on them to move. Sunday night Officer Penland again arrested eight in almost the same place, and guilty of the same crimes. They were lodged in the city jail, charged with vagrancy, and Mr. C. Rogers, on whose place they were camped, went down to the police court Monday morning to swear out warrants on a charge of trespass, but they had been turned out. People out our way are determined to stop the tramp nuisance, and if the city courts will not protect the residents of this part of the incorporation, they will hold another style of court out in the suburb. It is up to the proper channel. YEW PARK.

The panel has been postponed, no new date announced.