One of the items on Monday's Council agenda is an information report on the latest approvals on a new subdivision plan for the former Fairview site. I'm not sure there's anything important here, but it is a little interesting and here are some scattered notes. 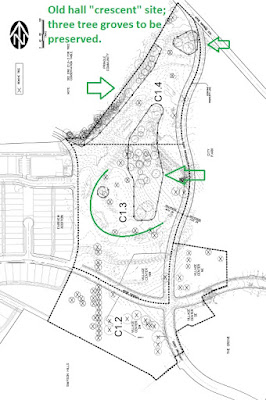 It's for a wedge that was largely the site of the old "crescent" of cottages, on a rise above Pringle Creek Community.

This one is all single detached housing, and deploys the houses on lots slightly larger that the initial Fairview plans had called for. This is a very suburban and conventional style development, with few of the eco bells and whistles of the initial vision. It should be noted that this change was already ratified conceptually in the revisions from 2016, and so these latest approvals are in what is formally a "minor" refinement plan amendment.

Some of the lots will use an alley system, though it will be partial and not comprehensive the way the alleys are in the Fairview Addition section.

The developer proposes to make most of the local streets fully public and to conform standards to current Public Works Design Standards.


There are probably multiple reasons for this and it may not be necessary to understand them. But this is another sign that the overall project is reverting to customary suburban convention here in Salem.

One thing that this highlights, and to which I have not given enough thought previously, is how we understand private roads in the total transportation system.

One of the approval criteria on our code is that a plan "provides safe and convenient bicycle and pedestrian access." As code is written, with an emphasis on "from within the subdivision to adjacent residential areas and transit stops, and to neighborhood activity centers...," it appears to be conceived on a hub-spoke model, serving residents only as they leave home, travel outside of their neighborhood, and then return home. It is not written for non-residents and as part of a network for through travel on foot or on bike.

These private roads are potentially a great low-traffic alternative and could function in a neighborhood greenway. But if they are private and the HOA or other similar entity can shut them down and prohibit non-local travel, as PCC appears to be doing during the Pandemic, then they are not really functional in the context of the whole, the city's transportation system, and could not be incorporated into a longer greenway.

For through travel the current approach relies on collectors and arterials striped with bike lanes, and this approach has not caught up to any family-friendly, all-ages-and-abilities standard. That more accessible standard could make good use of the private road network, but that does not seem to be envisioned now.
Posted by Salem Breakfast on Bikes at 4:00 PM