AC Gilbert gets all the attention here because of the Erector Set's success and the physical locus of the house and museum at Riverfront Park. But an important ingredient in that is the fact that he's a man and made a toy for boys.

Another Salemite, Georgene Hopf, later Georgene Averill (and Hendren sometimes also), achieved national prominence for dolls, but she is not known at all outside of very niche conversation.

It might be true that the scale of the Erector Set's sales dwarf those of Hopf's dolls, and that the Erector Set originated a new category of toy, and so the cultural significance of Gilbert might yet be greater, but it's also certain in our histories that playing with dolls is slighted in favor of that proto-engineering play. Gilbert is scientist and inventor. The attention, like the toy, has been gendered. Hopf certainly deserves more notice.

A century ago, in January of 1921 Hopf appeared a couple of times in the Society column of the morning paper here. The angle was the status conferred by the Fifth Avenue location of her shop in New York City and by recent magazine articles. It was the story of a local girl made good, "the most inventive and original designer in her line."

But they did not write a straight business piece and feature it outside the Society pages.

The enterprise was no flash in the pan, and Hopf's business went on for many years. Hopf's dolls remain significant and collectible today. One doll reference site lists a 50 year span of manufacturing, from 1915 to 1965. The Cleveland Doll Club featured her as an "extraordinary women artist" a couple years ago. In 2015 an episode of Antiques Roadshow featured a pair of her dolls and appraised them in the set at $1500. Hopf is also discussed throughout Made to Play House: Dolls and the Commercialization of American Girlhood, 1830-1930, though I was not able to read it for this post.

The Hopfs grew up in a house where our Supreme Court building is today, and the family was associated with the Dalrymple store in the 1890s and Strong's restaurant in the early 1900s.

She appears around 1900 in lists of winners at the State Fair in pyrography, and after she had moved to Portland appears in ads as someone accomplished and a demonstrator.

There's one wedding notice in 1904 to a Leonard Harold Pockman without a wedding, then a wedding came off with William Hendren. It did not end happily.

It is easy to imagine Hopf's success exceeded her husband's and he was not a supportive spouse. About the same time a capsule business piece in a Portland paper punned on "infant" in what I read as a kind of genial condescension.

Later she must have married James Paul Averill, though I did not find information about this marriage.

Her dolls were prominent enough in 1922 to be featured in a minstrel show and had a national reach, as the Great Falls ad show.

In 1938, she licensed and started producing Raggedy Ann dolls.

This is evidence for a long and prosperous business and there's certainly much more history there to surface. Most of the information on the web is on hobbyist sites, not often very well sourced with citations or other evidence.

Altogether, her career set next to AC Gilbert's does not appear to be outshined by much, if at all.

Here's the headline and top of her obituary in the New York Times from 1963. 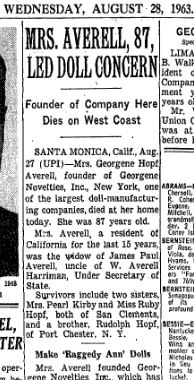 It noted that she manufactured an explicitly "American" doll during World War I and was able to meet a patriotic demand that the prevailing German manufactured dolls could not meet. This was probably key to the scale of her success.

The obit was under Averell rather than Averill. Updated with NYT clip.