Celebrate the 50th Anniversary of the Bike Bill by Strengthening It 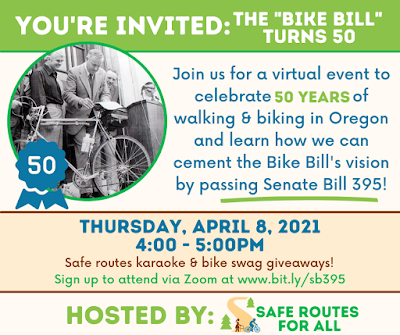 The Street Trust and coalition partners are hosting a zoomy celebration of the Bike Bill and trying to build more support for a proposed expansion in SB 395.

After a March 4th Hearing the bill, SB 395, remains stalled in the Joint Transportation Committee. Here, Cherriots has indicated support and the City of Salem indicated qualified support.

Also, since we need to reduce driving and total VMT in order to hit our climate goals, diverting funds and priorities from driving projects to non-auto projects is actually important!

So I do not see the City's concern is wholly offered in good faith. The amendments they propose may neutralize the concept for expansion and retain an autoist frame. There is some subtext and subterfuge here.

In any case, there is a relevant Legislator right here.

If you live in South Salem or West Salem in Representative Evans' district, he's the lone Salem-area legislator on the committee.

Tell Rep. Evans you'd like to see more money devoted to low-carbon transportation, including walking and biking, and better safety!

And yet, there might be a more valid criticism of the approach in SB 395. We should have performance metrics attached, so that if a project doesn't increase the actual numbers of people walking and biking, we have to do more. By the miserable standards of most other states, the original Bike Bill has been a great success. But by international standards or by any reasonable chart of growth in walking and biking, a half century of the Bike Bill has not gained us as much as is needed.

Before/after pairs of images of European cities are a whole genre of urbanist meme. In the same 50 years span of our Bike Bill - even less! - they accomplished so much more. But they also show the ways that better land use is key for better biking and walking, and also ways that sticks are necessary in addition to carrots.

So don't let the perfect be the enemy of the good and all that. Improved funding in a Bike Bill expansion would be a helpful thing. But by itself it won't be enough. This is why it has seemed useful to have Climate as a useful umbrella: Better walking and biking requires changes in land use, changes in commuter tax benefits, changes in gas tax/VMT tax, changes in funding for bike lanes and sidewalks, etc. Nesting these changes under a climate plan integrates and coordinates them. And that's what will get us change at the necessary scale. Not simply mandating a larger slice of State Highway Funding.

In an article on the possibility of a new round of highway revolt, historian Peter Norton says

For over seven decades, state and federal transportation authorities have waged an unwinnable war on traffic congestion, claiming that delay to drivers is a public loss that must be fought at public expense.

It's time we abandoned prioritizing convenience to drivers and prioritized convenience for those on bus, on bike or other wheel, and on foot.