In the conversation around Councilor Stapleton's motion to open parts of Winter and Union Street to non-auto travel, there were two plans, one for a soft closure to cars and one for a hard closure to cars.

The Railroad said, "Hold my beer."

Portland & Western Pacific Railroad is scheduled to perform track repairs on Union Street at the entrance to Riverfront Park. The work will impact drivers and park patrons starting August 6 at 7 a.m. to August 10 until noon.

Union Street and the Riverfront Park entrance will be closed between Front Street NE and the alleyway to the west. Vehicles traveling southbound on Front Street should watch for crews working in the area and expect some congestion and/or delays.

Riverfront Park is open. Detour routes will be in place to enter and exit the park. Enter the park using the Division Street NE alleyway west of the Front Street NE bypass and continue south towards Water Street SE.

That was from the City's release, and it is a little disappointing that it doesn't acknowledge the impact to the Saturday Market plan for people walking, biking, and rolling. The detour using the alley is known to many people who bike regularly, but might not be very inviting to a family new to biking. Crossing Front Street at Division can be tricky with the traffic from the Front Street bypass turning north, and Division at Commercial is still the charlie foxtrot.  The framing on the City's detour is all about travel by car.

The railroad work really defeats any idea of travel from West Salem or Wallace Marine Park to the market. It's still a hassle rather than newly convenient, and so the Union Street route will mainly serve people who already bike to the market and will not serve those who might want to try for the first time.

Fortunately this is just the one Saturday, and the second instance on the 14th should be smoother.

Meanwhile, and already having started, the street basketball tournament and festival, Hoopla, has taken over streets near the Capitol. 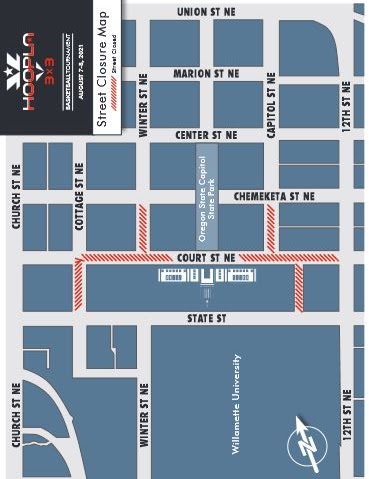 Beginning Monday, August 2, at 6 p.m. through Sunday, August 8, at 9 p.m., the following streets in the State Capitol area will be closed for the Hoopla Basketball Tournament:

All streets are expected to be reopened by Sunday, August 8, at 9 p.m. Drivers should avoid these areas and anticipate delays due to congestion.

Especially for those in cars, people will likely find the cumulative closures and detours annoying, and this is another way the City does not seem to have positioned the Saturday Market plan for success.