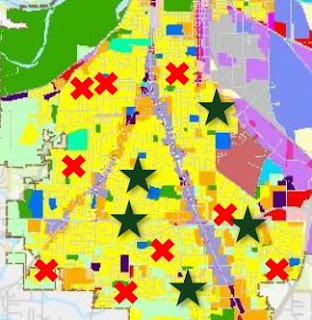 The City announced a revision to the neighborhood hubs for Our Salem. The way the information is presented, it does not appear we are to register very much other than that the City killed some. It would have been more helpful to see them isolated, and not on a map already cluttered with detail. The information design here really buries the matter.

Here they are isolated - but even this was a view the City never presented and had to be created by deselecting a bunch of layers in a map, and the most recent version of the map has layers collapsed so you can't deselect and isolate individual changes.

There is also little explanation with the announcement:

We have made changes to proposed neighborhood hubs based on community input and analysis. Those changes include:

Writing in opposition to one proposed hub, a neighbor claims "there are so many options available when it comes to accessing essential businesses" in the Laurel Springs area, on the back side of Candalaria as it slopes down to River Road and Croisan Creek. They also claim a hub would "encourage...loss of community and compromise safety." Something like a coffee shop, a classic "third place" and gathering place, would promote a loss of community? This is not-so-coded exclusionary sentiment.

The claim about "so many options" is also largely false. Here's the walkscore for the Laurel Springs hub that is proposed now for deletion in response to the criticism. Especially because of the hilly topography, it is car dependent. Sure you can hike to French Press or LifeSource, but it's an urban hike.

The City has evidence available to contest many of the criticisms of the hubs, and they choose not to use it.

One relevant metric the City did not include is any index of income, property values, or lot sizes around the hubs retained and hubs deleted. There might be something of a correlation there.

At the same time, even the earlier, larger set of hubs seemed still too much an ad hoc placement and insufficiently grounded in an analysis of emissions reductions.

By how much do they help us reach the goal of 50% reduction by 2035? Or are they largely ineffective symbolic action? How likely are they to be developed in reality as opposed to being just marks on a map? (Some have argued for a kind of zoning determinism, that once a lot is rezoned it will necessarily develop that way, but instead it seems more likely that most lots will not in fact change use or change structure type for some time. Mass demolition will not accompany rezoning.)

I do not think the hub concept as the City currently understands it and proposes to enact it is very helpful, so I do not want to argue that this round of deletion is by itself some great loss. Whether the final plan has 34 or only 13 proposed hubs may not be very critical. We don't actually know how important they might be.

I want instead to suggest that this deletion is a symptom of our lack of seriousness. Because the City and project team have not yet modeled a plan that shows us meeting that 50% reduction, and shows how the individual changes contribute to that reduction, including the hubs, we are just fiddling around with minor and largely symbolic changes on the margins.

Truly, adjusting the seating plan and deck chairs on the Titanic.

Previous discussion of the hub concept:

This is frustrating. People complain about the fact that children are isolated and there is not a sense of community like "In the good old days". Yet when an opportunity to provide a space for neighbors to meet each other they claim that it would "destroy a sense of community"?

Which would they prefer, a sense of community with a local place with a hairstylist or coffee shop owned by their neighbors, or driving down Lancaster mall to get a ten-dollar haircut at great clips

Thank you to the City of Salem for respecting the input provided by community members. If I wanted to live near a neighborhood "hub", I would have purchased property near one.