(Photo: Jonathan Maus/Bikeportland.)
How inspiring is it to look out over a ballroom filled with 750 people who care passionately about bicycling?

Saturday night Mayor Janet Taylor and the City of Salem won an Alice for the Union Street Railroad Bridge project and the City's other great bicycling progress. It was great to see Mayor Taylor at the podium talking about bicycling in Salem. I think the enthusiasm and numbers inspired everyone. 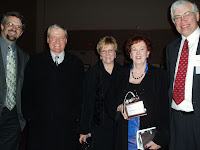 
A Statesman article on Sunday noted:

Despite the awards, Taylor said she recognizes the need to make Salem safer for bikes. Two bicyclists were recently struck by cars in Salem. One bicyclist died.

"We're not perfect," she said, "but we are working very hard to get to a place where you can have some really safe experiences riding your bike."

The BTA has a wrap here. And Bikeportland has a wrap here. Jonathan also posted a full suite of photos here. You can read the BTA profile of Mayor Taylor here.
Posted by Salem Breakfast on Bikes at 11:30 AM