Tripping Traffic Signals - How to Get the Green

As we're biking around the city we often hit traffic lights that don't seem very responsive. How do we trip the signal so we get a green? 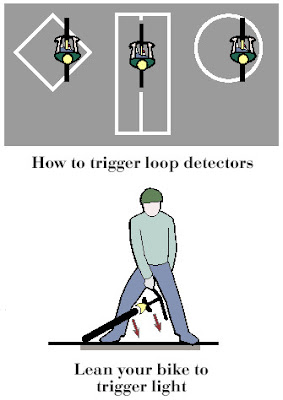 The oldest layer of traffic light controllers are rectangular loops cut into the pavement. Generally it's safe to assume these are no longer working. If you regularly encounter intersections with only a square loop, it would be good to know.

A decade or so later, engineers started using circular loops cut into pavement. Anytime you see a circular loop and a square/rectangular loop, you can assume the circular one is active.

In some instances you will see a sign that looks like this. City Engineers generally place them where the loops are thought not to work effectively for bicycles. 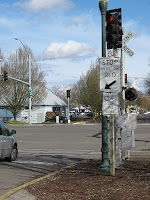 This sign is newly placed at the intersection of Union and Front street, right where east-bound bicycle traffic off the new Union Street Railroad Bridge will emerge.

A solution for this intersection is the current iteration of traffic signal control: Traffic cameras, video cameras mounted over traffic light standards that feed into computer controllers.

The computers analyzing the image feed are programmed to recognize changes in "detection zones." Traffic engineers place detection zones both in auto traffic lanes and in bike lanes. The standard placement is just behind the crosswalk. In some instances with long, wide curves, or in other non-cookie-cutter intersections, the zones may be farther back, and are not always easy to predict. Buried in the City's website are a couple of still images of intersections with the zones marked out. These are pretty standard intersections, with few irregularities. One thing to note about the bicycle zones is that if you are up against the curb, especially if you clip out and rest your foot on the curb, you may be too far to the edge and out of the detection zone.

Here's a view of Liberty looking south at the intersection with Browning: 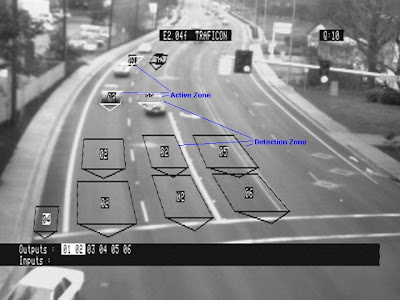 Here's a view of Liberty looking north at the intersection with Browning: 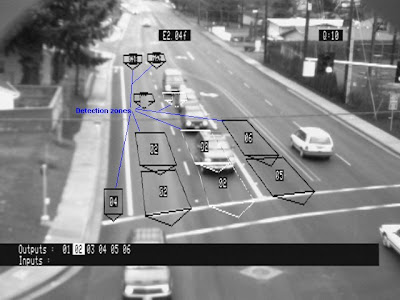 (The intersection of Liberty and Browning is ironic - not in a good way! - from a bicyclist's standpoint, of course, because there is no bike lane on Liberty from Browning north to Commercial. The detection zone in the bike lane on the south side [top picture] of the intersection is superfluous, since a bicyclist going north must take the lane, and a bicyclist turning right can do so after safely yielding and doesn't really need a light.)

It might be possible to develop a project to improve traffic light responsiveness to bicycles. If you would leave a comment about problematic intersections, we can tally them and look for patterns and try to fold improvements into existing projects. A new traffic camera and video feed currently costs around $8500. The city will weigh cost against impact, and demonstrating a pattern of complaints and problems will buttress the case for effective impact.
Posted by Salem Breakfast on Bikes at 9:30 AM

Would appreciate a photo of what a loop looks like, circular or square. This post makes it seem like they'll be so visible that I'll know when I'm in one and when to lean my bike over to trigger it. Can't say I've ever seen one -- usually I find out that I'm in a loop-controlled intersection only when I get no green light and it's cycling through the lights in the other directions just fine.

P.S. I mean a photo of what they actually look like to the naked eye when you're sitting on the seat of a bike . . .

Loops are generally pretty easy to spot. 3/4 inch of tarry caulk covers the incision most times. Maybe the illustration is misleading because the loops are outlined in white rather than black. But the cut in the pavement and the shape is a good cue. Just look for black, tarry outlines.

I really appreciate for your brilliant Efforts on spending time to post this information in a simple and systematic manner.