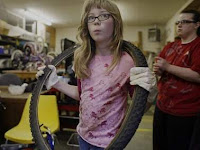 Like the spokes of a wheel, The Salvation Army's new bicycle repair program's benefits reach far and wide.

"Fixing bikes for little kids makes me feel like I'm accomplishing something," Breanna Sill said. "It makes me feel good about myself. It gives me confidence."

The 10-year-old lives with her family at The Salvation Army Shelter on Front Street NE in Salem.

She's one of the homeless children at the shelter who Kyle Gilmore had in mind when he created the program.

"I wanted to give the kids something constructive to do, (offer them) a skill they could learn that would help them develop a sense of responsibility," he said.

That aspect of the program appeals to Ginger Alden. She and her two children have been living at the shelter since July.

"This program is helping my kids to widen their education," she said. "It teaches them, while giving them something to do."

Bikes are donated by The Salvation Army, families and individuals. Some are unclaimed bicycles left at schools or at bus stops.

The innovative program gives kids ages 9 to 17 living at the shelter a shot at learning bike-repair skills in exchange for their own wheels.

On bike-repair days, children learn how to overhaul a bike, take its components apart and clean and replace them.

Refurbished bikes are given away free to needy individuals, including senior citizens.

"It's a good deal, a really, really good deal for the kids," he said. "They all want to be the one to turn the wrench."

Besides bicycles, other items needed include bike repair stands, helmets, knee pads, small tool boxes, and tools such as wrenches and screw drivers.

"We could use three-wheel bicycles for senior citizens," said Dan Reichman, a Salvation Army chaplain. "Now that there's no Saturday bus service, it's difficult for a lot of them to get around."

Bikes that are broken, in need of repair or no longer being used can be dropped off at The Salvation Army, 1887 Front St. NE, Salem.

They will be raising funds today during a car wash from 1:30 to 6 p.m. on The Salvation Army property on Front.

But instead of driving, consider making a donation!
Posted by Salem Breakfast on Bikes at 8:47 AM