In today's Oregonian, Steve Duin and Gov. Kulongoski offer dueling opinions on the Business Energy Tax Credit. Hundreds of millions of dollars go from tax-payers to support green projects - many of which are important and have merit, some of which are speculative, and some of which appear pretty close to fraudulent. The pieces point to the difficulty in allocating resources to promote and invest in new technologies that do not yet generate profits.

A different program on which the Governor is similarly optimistic is the electric car:

My vision has always been for Oregonians to be able to drive from Astoria to Ontario and from Portland to Ashland emission free.

Of course, Oregonians are already able to bike in Astoria, Ontario, and Portland emission-free. The disparity in investment between the proven technology of bicycling and the novel technology of electric cars is disappointing. 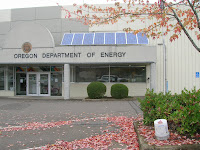 Out in front of the Department of Energy is an overturned bucket. Under the bucket is the stub to a power source.

At some point in the next year or two the bucket will be transformed into a shiny charging station for electric cars.

ODOT's Office of Innovative Partnerships has been giving presentations on a pilot program for electric cars. In partnership with Nissan, an Arizona firm eTec is installing a pilot program for charging infrastructure in 5 markets, one of them being the I-5 corridor from Eugene to Portland. They will install 2500 charging stations. Salem will be part of it.

The program will be highly subsidized. The total national grant is almost $100 million. Here in Oregon, together the state and feds will offer tax credits up to $9,000 for qualified purchases of electric vehicles. Tax credits and streamlined building code regulations will also expedite installation of charging stations. Salem stands to get a couple of million for its infrastructure.

The program also has a propaganda end. To stimulate demand, during the 40s and 50s car manufacturers and road builders advertised cars and road trips. The whole Route 66 mythos. The aughts and teens are shaping up no differently. (And we say this, please note, without (much) irony, as we are unabashed bicycle propagandists!) One of the goals is to address the

A shift to an electric fleet could be a good thing. But the ostensibly clean magic of batteries and plug-ins is designed to let us keep our driving habits intact. Batteries and plug-ins are like plenary indulgences, offered to absolve our conscience and conduct and to wash away our carbon sins. But in truth the electric fleet is only a good if we reduce the amount we drive and reduce our reliance on drive-alone trips, especially short trips.

At the MPO Greenhouse Gas Emissions Task Force meetings last month, ODOT presented a background memo. In it they observed that

Reducing on-road vehicle GHG emissions by 75 percent from 1990 levels would be equivalent to reducing Oregonian’s per capita annual consumption of petroleum fuels from 567 gallons to 68 gallons. This will not be achievable without transformative changes in vehicle fleets and fuels such as electrification of the light vehicle fleet. Reducing light vehicle VMT [vehicle miles traveled] will be necessary in order to accommodate transportation that will not be so easily transformed.[emphasis added]

The drive to switch to electric cars without also offering incentives to reduce driving is magical thinking. It is denial of a future in which energy of all kinds is increasingly expensive.

California’s push to lead U.S. sales of electric cars may result in higher power rates for consumers in the state, as a growing number of rechargeable vehicles forces utilities to pay for grid upgrades.

Things will be no different here in Oregon. Without offsetting reductions in energy demand, the rising demand from an increasingly electric fleet will drive up energy costs and tempt utilities to use coal, the power source one critic has recently called "the meth of the energy world."

Indeed, there's good money to be made on a swapping gas cars for electric cars. For manufacturers, each gas-powered car will need to be replaced by a newly manufactured electric car. For power utilities, electric cars are the razor handle, and each instance of battery charging the razor refill. There's money in the refill. So they plug the handle:

Within a decade, plug-in cars could account for as much as 20% of new vehicles sold in Oregon.

But what if that read bikes? How about millions of dollars so people will gain familiarity and confidence in bicycling? What if bikes were 20% of new vehicles sold in Oregon?

Now that's a goal worth striving for! And wouldn't a tax credit of $1000 for a much cleaner bike be even cheaper and more effective than $9000 for a car?

In instance after instance, you could swap bicycle for EV and have an even more compelling set of claims. For example:

Compact urban boundaries are also perfect for bicycling! The City of Portland's new Bicycle Plan for 2030 contains this over-arching goal:

Create conditions that make bicycling more attractive than driving for trips of three miles or less.

The hypothetical swap of bikes for electric cars points to our problem with allocating resources.

The problem is hardly Oregon's alone. Nationally, Streetsblog NY observes that ev gets more than transit:

Bloomberg notes that the Obama administration's total investment in low-emissions autos has topped $11 billion in six months -- about $500 million more than the annual budget of the Federal Transit Administration.

Millions of dollars could instead go towards bicycling - a form of active transportation that improves health, reduces healthcare costs, and puts money in the pockets of families who find they need one fewer car, much less gas and insurance.

And you know, even the military is worried about the lack of exercize!

"We've never had this problem of young people being obese like we have today," said Gen. John Shalikashvili, former chairman of the Joint Chiefs of Staff. He calls the rising number of youth unfit for duty a matter of national security. "We should be concerned about how this will impact this overstretched Army and its ability to recruit."

If the allocation of resources were rational, we'd be spending millions of dollars marketing bicycles, improving bicycle infrastructure, and making it easy for people to drive less. Instead, we are working on ways to continue the habits that aren't working.

Without programs to reduce the miles we drive, the conversion to electric cars only maintains our bad habits and accelerates the coming warming. Investing in bicycling is a much cheaper way to accomplish all this.
Posted by Salem Breakfast on Bikes at 1:00 PM

Electric cars are useful in small doses, and can be beneficial for the environment. However, they cannot, and should not, be used to replace cars on the mass scale. We need more efficient long distance transportation systems for cargo and passengers, such as electrified rail.

The AP ran a an article about converting old tractors from belchy and balky gas to electric. This sounds great, and it exactly the right use for electric technology - reuse!

The recipe is here.