Straight from NY Pizza and Bike Parking on the Other Corners

One of the best racks around town is the one on the rear of Straight From New York Pizza at the intersection of Owens and Commercial SE. It's from Creative Metalworks and is the same design as the one at LifeSource. On some days, the "Liberty" cut-out catches the afternoon sun and makes a lovely silhouette.

One of the principals of SFNY is a big bike commuter, and provided excellent pizza for the Bike Commute Challenge Kick-Off. Again, a big thanks to SFNY (and Indigo Wellness and Widmer Bros.)!

Turns out there's actually an interesting cluster of bike parking at the intersection! 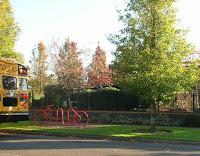 Just across the street at the Best Little Roadhouse is a stylized bike. This rack is pretty, but as it is separated from the entry by quite a ways, and it is not visible from within the restaurant. But it does advertise bikes! Was there a bike shop nearby at one time? 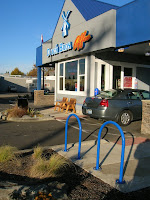 And on another corner of the intersection, Dutch Brothers has two racks installed between the drive-thru and the sidewalk. The racks aren't ideally placed on the concrete pad, and it's not clear the pair could be loaded to intended capacity with four bikes. These look like they might be installed as part of code for new construction.

The cluster of bike parking, more than decent by Salem standards, suggests this could be an area for bikey business. Wouldn't that be great! The biggest problem is the difficulty of biking along South Commercial here. The road narrows and there's no bike lane. With the high speeds and high traffic volumes, the Salem-Keizer bike map marks it in red. While Saginaw offers a scenic low-traffic alternative, Saginaw is something of an orphan, dead-ending on both the north and south. Even so, there's intriguing potential here. 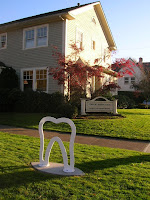 On the other side of downtown, at the corner of 13th and Chemeketa, Dr. Gary Boehne's dentist office has a cute bike rack that doubles as business sign and advert. It's visible from within and from the entry, and lacks only shelter to be top-notch. That's a great form of short-term parking for a trip to the dentist! (h/t reader Stephanie)
Posted by Salem Breakfast on Bikes at 8:00 AM