The next two chapters in The Death and Life of Great American Cities are on Parks and Neighborhoods. On parks and open space, Jacobs has much to say that is relevant. About neighborhoods, she is working on a much different scale than Salem; moreover, the Salem neighborhood associations, formed in the 70s, like those across the country, were in many ways a direct response to Jacobs' arguments.

Government is a huge engine for Salem's economy. At the same time, a little like ivy or kudzu, the large single-use office parks that ring downtown Salem have crowded out a healthy ecosystem of mixed uses that would better nourish the historic downtown core.

The aim of the City Beautiful was the City Monumental. Great schemes were drawn up for systems of baroque boulevards, which mainly came to nothing. What did come out of the movement was the Center Monumental, modeled on the [Columbian Exposition of 1893]. City after city build its civic center or its cultural center. These buildings were arranged along a boulevard as at Benjamin Franklin Parkway in Philadelphia, or along a mall like the Government Center in Cleveland, or were bordered by a park like the Civic Center at St. Louis, or were interspersed with park, like the Civic Center at San Francisco. However they were arranged, the important point was that the monuments had been sorted out from the rest of the city, and assembled into the grandest effect thought possible, the whole being treated as a complete unit, in a separate and well-defined way.

People were proud of them, but the centers were not a success....people stayed away from them to a remarkable degree.

The architecture of the City Beautiful centers went out of style. But the idea behind the centers was not questioned, and it has never had more force than it does today. The idea of sorting out certain cultural or public functions and decontaminating their relationship with the workaday city [prevailed].

[O]nly a genuine content of economic and social diversity, resulting in people with different schedules, has meaning to the park and the power to confer the boon of life upon it.

For every Rittenhouse Square in Philadelphia, or Rockefeller Plaza or Washington Square in New York, or Boston Common, or their loved equivalents in other cities, there are dozens of dispirited city vacuums called parks eaten around with decay, little used, unloved.

In orthodox city planning, neighborhood open spaces are venerated in an amazingly uncritical fashion, much as savages venerate magical fetishes.

One of the bitterest disappointments in housing project history is the failure of parks and open grounds in these establishments to increase adjacent values or to stabilize, let alone improve, their neighborhoods. Notice the rim of any city park, civic plaza or project parkland: how rare is the city open space with a rim that consistently reflects the magnetism or stabilizing influences residing in parks.

Rittenhouse Square, the success, possesses a diverse rim and diverse neighborhood hinterland. Immediately on its edges it has in sequence, as this is written, an art club with restaurant and galleries, a music school, an Army office building, an apartment house, a club, an old apothecary shop, a Navy office building which used to be a hotel, apartments, a church, a parochial school, apartments, a public-library branch, apartments...[etc]. Does anything about this physical arrangement of the neighborhood affect the park physically? Yes. This mixture of uses of buildings directly produces for the park a mixture of users who enter and leave the park at different times. They use the park at different times from one another because their daily schedules differ. The park thus possesses an intricate sequence of users. In short, Rittenhouse Square is busy fairly continuously for the very same basic reasons that a lively sidewalk is used continuously: because of functional physical diversity among adjacent uses, and hence diversity among users and their schedules.

Washington Square in Philadelphia, a Failure

Philadelphia's Washington Square - the one that became a pervert park - affords an extreme contrast in this respect. Its rim is dominated by huge office buildings, and both this rim and its immediate hinterland lack any equivalent to the diversity of Rittenhouse Square - services, restaurants, cultural facilities. The neighborhood hinterland possesses a low density of dwellings. Washington Square thus has had in recent decades only one significant reservoir of potential users: the office workers....This principal reservoir of users all operate on the same schedule. They all enter the district at once. They are again incarcerated again after lunch. They are absent after working hours. Therefore, Washington Square, of necessity, is a vacuum most of the day and evening. Into it came what usually fills city vacuums - a form of blight.

The Scourge of Monoculture

It need not have been office work that depopulated [Washington Square]. Any single, overwhelmingly dominant use imposing a single schedule of users would have had a similar effect. The same basic situation occurs in parks where residence is the overwhelmingly dominant neighborhood use. In this case, the single big daily potential reservoir of adult users is mothers. City parks or playgrounds cannot be continuously populated by mothers alone, any more than by office workers alone.

It is not difficult to see the parallels. Salem's downtown core is bounded on the south and east and west by large blocks of these sorted and decontaminated units.

On the east and south, precisely at 5pm each workday the spaces empty. The Pringle Creek Renewal Area and the Capitol Mall and State offices have a single use. On weekends and at night they are dead zones. As desolate islands, they also act as pedestrian barriers to the Bush-Gaiety Hill and the Court-Chemeketa neighborhoods (map here). There is little to pull people through the areas and into downtown.

The Capitol Mall has a long history. Up until 1935 it was a thriving residential neighborhood for established names in Salem. In her excellent article, "The Children of Piety Hill" (Historic Marion, 42:1), Virginia Green writes about the houses of Salem pillars like the Kays, Cookes, Pattons, Parrishes, McNarys, Eyres, Barnes, Lachmunds, and Spauldings. First Presbyterian was on the east side of Winter, kitty-corner to its current site.

After the 1935 Capitol fire, the State Capitol Reconstruction Commission claimed the four blocks just north of it, those bounded by Winter, Court, Capitol, and Center streets. The WPA helped with the State Library building, and in time three more office buildings replaced the homes. (Here are two photos of the Cooke-Patton home, just prior to razing. You can imagine the home's footprint just to the east of the State Library, between it and the fountain.)

By 1949 state planners envisioned a larger mall. Though it was debated into the 70s, with Gov. Vic Atiyeh pushing for a suburban expansion of the state offices out east near I-5, the mall ultimately was built largely as envisioned. Salem planners thought the concentration would assist with parking and make transit easy and attractive to use. 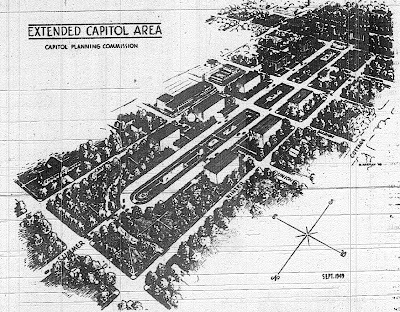 Also in the 70s, the Pringle Creek Urban Renewal Area was built. It is classic urban renewal with open space and mid-rise building massing. In this photo the Library is off to the right, and visible from the bottom are the Civic Center, Firehouse, Pringle Parkade (neither the plaza nor post office is built yet), SAIF complex, and Robert Lindsey Tower. 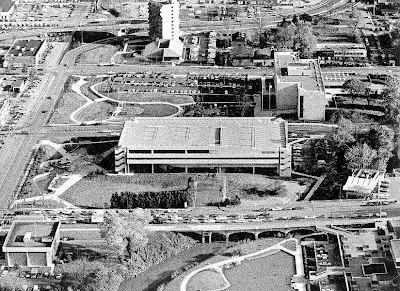 On the west is the more complicated situation of Riverfront Park. It is a great improvement over the mill contaminated waterfront, and it has the beginnings for complexity: The carousel and playground, an ampitheater stage, the public docks, covered picnic area, the A.C. Gilbert complex, and the Union Street Railroad bridge. Soon there will be the Boise Redevelopment project.

But Riverfront Park is badly disconnected from greater downtown by a great moat: the very busy Front Street by-pass and two additional moat rings in the Commercial/Liberty couplet. Business also face State, Court, and Chemeketa rather than Front. The lone exception, The Rivers condos, might as well be several blocks away, and until there are better connections across Front, its natural walking connections will always be to the east rather than west towards the river. The planned closure of State street at the Carousel will intensify the moat and make the park and the Boise project even more car-dependent (more here and here). No business or cafe activity creates psychological bridges across Front.

One of the reasons the downtown core sometimes struggles is because it is not ringed with residences and a mix of uses that would send people downtown in waves throughout the day and night. This is over-simple, of course, but is an important part of the problem. The parks and open space around office buildings aren't structured in ways that make the areas and adjoining ones really vital.
Posted by Salem Breakfast on Bikes at 12:01 PM

I was just thinking along the same lines because I found myself pondering again why "Peace Plaza" is so unloved and so unlovable.

The whole city center (Vern Miller) complex looks like Albert Speer designed it -- ugly, hulking brutalist architecture that looks like it could have been a set in a movie version of 1984. Bikes supposed to park in the rain, cars get nice covered parking. Even the pleasant little pond is unloved and barely used because there are no amenities to make it welcoming.

I sent a note to Chuck Bennett suggesting that I would be happy to lead an effort to raise money to buy a bunch of these chess/checker tables and stools, if we could get the parks folks to agree to install them -- I figure six in Peace Plaza and then three or four down by the pond in a row -- nice playing tables and good for having lunch or a snack.

Totally agree! Don't like the Brutalism, either. It hasn't aged well at all - just as you say: it's ugly, forbidding, and fortress-like. Surely Peace Plaza's deadness is not all the sort of peace its designers intended. (Check out all the people and the bikes at the dedication!)

Good luck with the chess effort! That's a fine idea for fair weather!

Hopefully the Boise project's efforts to daylight the creek will create more traffic along the pond, and Waterplace also adds more potential users to the mix. Still, I fear these will be too spaced-out and isolated. Even the shops, barber, and restaurant under the Pringle Parkade aren't enough to make Mill Race Park very lively.