Why Watch? You can Bicycle in the Holiday Parade!

Usually the "floats" are motorized. This year, we have a non-motorized alternative: Join the bicycling brigade! The Salem Bicycle Club is sponsoring a bicycling float! Come one, come all! You don't have to be a member of the club to enjoy the fun!

How long since you've been in a parade, instead of watching from the curb? How long since you've BIKED in a parade? Here's your chance to remedy that! Coming up on December 12 - the Salem Bike Club's first annual entry in the Festival of Lights Holiday Parade. All you need is some lights for your bike, warm clothes, helmet and a sense of fun. 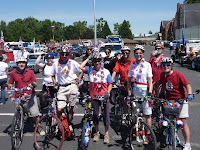 Parade particulars:
Saturday, December 12
Meet at the Red Lot* at 5:00 p.m. for sign-in and last-minute practice (across from McDonald's at Center and Capitol Streets N.E.)
Parade starts at 6:30 p.m.
Ride Leader: Robert Fox
(e-mail Robert with any questions: refox1@comcast.net)

Special bonus points for cool lighting systems like hokey spokes, FlexPro, or other "absolutely extravagant" carnival lights! Robert may have some extra lights, so contact him if you're interested.

*Here's a location map for the Red Lot.
Posted by Salem Breakfast on Bikes at 10:57 AM