2009 is almost over and it was a year of significant improvement for bicycling in Salem! Here's a top 10 list in chronological order. What's your top 10 list of bikey events for 2009?

Things were perhaps slow until April. Then - wham! The long awaited opening of the Union St. RR Bridge was the top bike story of the year and it was one of the Statesman's top stories of 2009 as well. Also in April 100 bike advocates came to the Conference Center for the Oregon Bike Summit. (Photo: Thomas Patterson, Statesman Journal)

In May Oregon Parks and Recreation relaunched the Willamette Valley Scenic Bikeway. 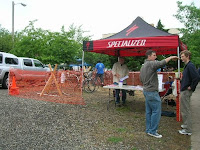 Launched in June and running all summer, Friends of Salem Saturday Market operated a Valet Bike Parking service so people didn't have to bring cars to the market and could shop truly sustainably.

In June the Legislature passed the huge "Jobs and Transportation Act," HB 2001. Like it or not, it will shape our transportation choices for the next few years.

In July the City received two Transportation and Growth Management Grants to update the city's Transportation System Plan, and to create a district-wide Safe Routes to School Program. 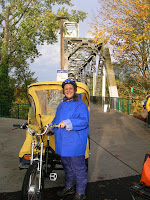 In October the Salem Bike Taxi launched and added an important new way to get around downtown.

In November City Council voted to use sharrows on Commercial and to reduce it by a lane downtown.Also in November OBRA held the state Cyclocross Championships at Fairgrounds. This was the biggest race in Salem! 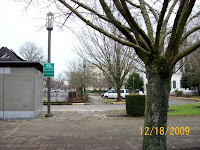 Throughout the year incremental improvements on Chemeketa brought the dream of a bicycle boulevard closer to fruition: In December the City started placing signage on Union St RR Bridge and Chemeketa. Earlier in the year State Parks worked to grind some curb, remove some bushes, and created a new way around the bathrooms on the Capitol Mall.

Runners-up and other important bike events:

Mayor Taylor and the City won an Alice Award and received a gift from Sanyo Solar of an Eneloop battery-assist bicycle.

All year, the Rivercrossing Alternative Modes Study worked on developing plans to increase bike commute trips across the river.

All summer and winter the Bike Drill Team grew and joined in several parades.

Lots of things to build on! There are elections, the short legislative session, the draft Environmental Impact Statement on the proposed third bridge, project selection and implementation of the road bond projects...lots of things going on and hopefully good momentum from 2009 takes us into an even better, bikier 2010!
Posted by Salem Breakfast on Bikes at 8:15 AM