Waking up to a Sunday editorial strongly endorsing the Minto-Riverfront Bridge was pretty nice!

Community leaders understand the potential that a bridge would add to Salem's quality of life. Although some critics scoffed at the idea of a pedestrian bridge that links West Salem and downtown, it has proven to be more than a symbolic connection. The bridge is popular among walkers, cyclists and people who simply need to get from one place to another.

Sometime in the future, it may be possible for someone to bike (or take a long walk) from South Salem to West Salem while spending minimal time on a congested road. Trails through Minto-Brown and Riverfront parks — with assistance from a future bridge — would create a centralized connector for Salem's west and south sides.

Lancet Report on our Obesogenic Environment 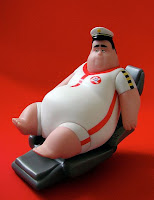 Sometimes it still boggles my mind that Disney put out a film with such a sharp critique of American living and lifestyle.

It came to mind yesterday while reading a note about a new report on obesity in The Lancet. The report itself is a rehash of familiar themes, but one concept seemed useful:

Changes over the past century in the way food is made and marketed have contributed to the creation of an “obesogenic” environment in which personal willpower and efforts to maintain a healthful weight are largely impossible, the report noted.

Although this addresses the consumption side, it doesn't address the active side of burning calories. But while it's also jargony, the concept of an obesogenic environment also seemed like useful analytical shorthand.

While the gym might be a good choice for some people, a healthy lifestyle shouldn't require a gym.

(Image from Flickr user j_pidgeon)
Posted by Salem Breakfast on Bikes at 9:00 AM

"Wall-E" should be played at assembly in every public school every year.

It's a great film, isn't it! - sweet, charming, and tart all in one savory bite.