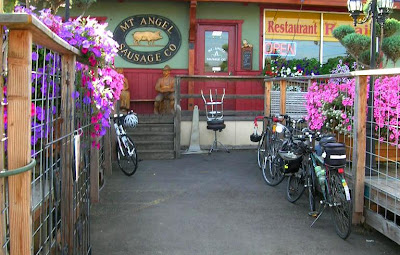 Last weekend a trip out to Mt. Angel underscored the importance of bike tourism in the total bike economy. We weren't the only ones on bike at the Mt. Angel Sausage Company, but there was no obvious bike parking. Being so near to Salem and Portland, you'd think Mt. Angel would be an obvious place for bike tourism!

On Friday State Parks and Recreation will hold a meeting in Florence it looks like to finalize three new scenic bikeways. The process for creating and maintaining them is different from the one associated with the Willamette Valley Scenic Bikeway. Mainly, as both a cost-cutting and decentralizing gesture, responsibility for the marketing and management is devolved out to a committee of local champions. On the one hand, fewer state funds will go to them; on the other, local engagement will provide real enthusiasm and market responsiveness instead of potentially distant bureaucracy.

As we see with the somewhat orphaned and neglected status of Willamette Valley Scenic Bikeway, without local champions not much is done with the bikeway and local tourism.

Wouldn't it be great for Travel Salem and other pro-bike businesses to get behind the Willamette Valley Scenic Bikeway and also create a marketing plan for it?

Here are the three plans for the new bikeways. The Blue Mountain Century. The Three Sisters Bikeway. And The Old West Bikeway.

Take a look at them. Are you looking for an advocacy project that involves promoting local bike tourism? Maybe this is for you!
Posted by Salem Breakfast on Bikes at 12:01 PM

The feed is finally working - but there's a strange, long, and unpredictable delay, from less than an hour, to up to 48 hours or so. It should appear, but I can't tell you when!