Early this summer you might remember news about STRAVA making heat maps of bicycling activity available.

ODOT purchased a round of this data, but it looks like they might have evaluated the on-going subscription cost and decided that something in-house could be cheaper and more predictable heading into the future.

Last week together with PSU and a few others they announced ORcycle, a smartphone app that will log your bicycling activity and feed it to the active transportation planners who are desperately looking for data on dangerous places, raw counts of people who bike, as well as movements people actually take through intersections and other facilities. 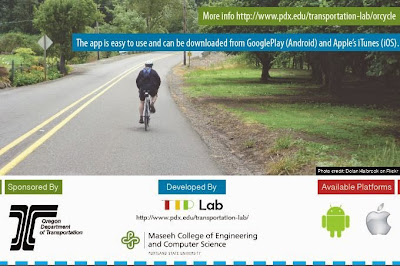 The PSU site has a privacy document, so you can evaluate how to make the privacy settings work for you. If you already use something like STRAVA, I don't know if ODOT hopes this will replace that app for Oregonians, if the apps layer easily, or if you'll be faced with needing to turn on both of them each time you go out. (I hope there are plans for a v2.0 release that will iterate features as needed as more people use the system.)

BikePortland has a longer story on the app. Practically the first thing that occurs to folks is that there are lots of people who use bikes who don't also have the latest smart phone. So there are going to be significant demographic skews to the resulting data set. And STRAVA's sample size might always be signficantly larger than the number of those installing this app.

But it's important to remember that this is just a tool. Some data is usually better than no data!

The app is a very interesting move, and it will be fascinating to watch it evolve and to see how it might inform funding and design choices in the future.

Back in April we mentioned this interview with Rear Admiral David Titley on Slate:

And he's coming to town later this month!

Rear Admiral, USN, (Ret.) David W. Titley, Founding Director of the Center for Solutions to Weather and Climate Risk, The Pennsylvania State University, will give a talk, "Climate Change and National Security: People not Polar Bears," at the Salem City Club on Friday, November 21st.

Hopefully this will get different folks thinking, and won't just be more preaching to the choir. As he says, "Conservative people want to conserve things."
Posted by Salem Breakfast on Bikes at 12:01 PM

'We know the basic story in Syria by now: From 2006-2010, an unprecedented drought forced the country from a groundwater-intensive breadbasket of the region to a net food importer. Farmers abandoned their homes—school enrollment in some areas plummeted 80 percent—and flooded Syria’s cities, which were already struggling to sustain an influx of more than 1 million refugees from the conflict in neighboring Iraq. The Syrian government largely ignored these warning signs, helping sow discontent that ultimately spawned violent protests. The link from drought to war was prominently featured in a Showtime documentary last year. A preventable drought-triggered humanitarian crisis sparked the 2011 civil war, and eventually, ISIS.

A new study published Monday in the Proceedings of the National Academies of Science provides the clearest evidence yet that human-induced global warming made that drought more likely. The study is the first to examine the drought-to-war narrative in quantitative detail in any country, ultimately linking it to climate change.

“It’s a pretty convincing climate fingerprint,” said Retired Navy Rear Adm. David Titley, a meteorologist who’s now a professor at Penn State University. After decades of poor water policy, “there was no resilience left in the system.” Titley says, given that context, that the record-setting drought caused Syria to “break catastrophically.”'