A Century Ago: Speed Maniacs, Autoists, and the Fight over Road Space

Routinely we hear about how it is "common sense" for people on foot to "get out of the way," to wear bright clothing, to be constantly on the lookout for more powerful cars and their drivers. It is "common sense" that we must prioritize the free-flow of traffic, and manage for that flow around the effects of "pedestrian impedance."

It wasn't always this way, and this mid-century philosophy of autoism, we never tire of saying here, is something new, something culturally constructed, and not common sense at all.

100 years ago, common sense suggested that speed demons and autoists were trying to take over the roads. 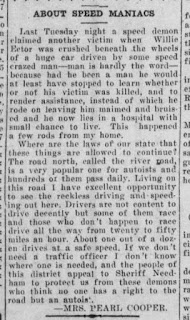 Last Tuesday night a speed demon claimed another victim when Willie Ector was crushed beneath the wheels of a huge car driven by some speed crazed man - man is hardly the word - because had he been a man he would at least have stopped to learn whether or not his victim was killed, and to render assistance, instead of which he rode on leaving him maimed and bruised and he now lies in a hospital with small chance to live. This happened a few rods from my home.

Where are the laws of our state that these things are allowed to continue? The road north, called the river road is a very popular one for autoists and hundreds of them pass daily. Living on this road I have excellent opportunity to see the reckless driving and-speeding out here. Drivers are not content to drive decently but some of them race and those who don't happen to race drive all the way from twenty to fifty miles an hour. About one out of a dozen drives at a safe speed. If we don't need a traffic officer I don't know where one is needed, and the people of this district appeal to Sheriff Needham to protect us from these demons who think no one has a right to the road but an autoist.

For an academic study of this, see Peter Norton's book Fighting Traffic:


Motorists arrived in American city streets as intruders, and had to fight to win a rightful place there. They and their allies fought their battles in legislatures, courtrooms, newspapers’ editorial pages, engineering offices, school classrooms, and the streets themselves. Motorists who ventured into city streets in the first quarter of the twentieth century were expected to conform to the street as it was: a place chiefly for pedestrians, horse-drawn vehicles, and streetcars. But in the 1920s, motorists threw off such constraints and fought for a new kind of city street—a place chiefly for motor vehicles. With their success came a new kind of city—a city that conforms to the needs of motorists. Though most city families still did not own a car, manufacturers were confident they could make room for motor traffic in cities. The car had already cleaned up its once bloody reputation in cities, less by killing fewer people than by enlisting others to share the responsibility for the carnage.