A reader sent along a copy of the 1980 "Willamette River Bridges Final Environmental Impact Statement and Section 4(f) Statement."*

As these things always are, it is fascinating to see what they got right, what they got wrong, and how our cultural norms have changed or remained the same.

One of the biggest things is that like with all the other traffic modeling done circa 1980, they significantly overestimated traffic volumes.

Another fascinating admission was that it would take 27 years (and the reality was probably longer because the traffic didn't grow as fast) to "pay off" the additional energy used in construction. That's evidence that this kind of project is not sustainable. Additionally, once we subtract the energy inputs from on-going maintenance, like the paving this summer, it seems likely there is never a net energy advantage from projects like this. (And this doesn't touch greenhouse gas emissions at all.)

At least in 1980, they were honest about incentivizing development in West Salem.


[I]t has been argued - and logically so - that growth must be accommodated somewhere in the area, it and is better placed in the hills of West and South Salem than in the flat agricultural land east and west.... 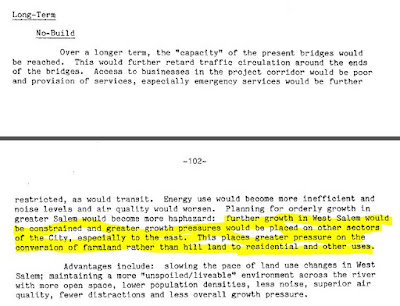 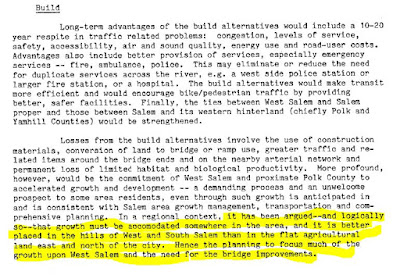 This is rather explicitly a policy choice and subsidy for development on the "hill land." The hills were full orchards, however, and development there also "placed greater pressure on the conversion of farmland." That rationale doesn't quite add up. This looks like rationalizing a preference made for other reasons.

This policy choice also accepts and reinforces the norm of car-dependent development on the edges of the city.

Not much has changed, but it's time for a course correction. We are now at a point when our development and redevelopment strategy needs to embrace centripetal rather than centrifugal patterns, and to focus on walkable neighborhoods that enable car-lite or car-free living. Placing the bulk of new development "in the hills of West and South Salem" induces traffic and congestion, digs in on compulsory autoism and its cost burden, and exacerbates greenhouse gas emissions.

Significantly, in the decades since 1980, we pretty much systematically ignored some of the key recommendations. 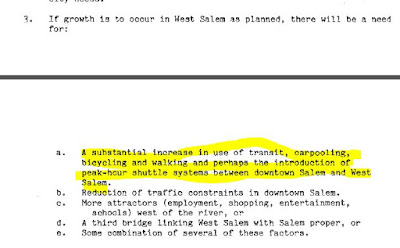 It's a broken record, stuck on a looping repeat!

Imagine what congestion today might look like if we had made a determined effort for transit, carpooling, bicycling, walking, a peak-hour shuttle; if we had made an equally determined effort to support, even partially subsidize, trip destinations in West Salem that did not require crossing the river; and if our land use and development patterns retained more of the street grid and allowed higher density so that transit functioned better.

Also interesting is part of the Section 4(f) analysis, which had an additional 6(f) component:


Since the park was partially developed with Land and Water Conservation Funds, any land taken must be replaced "at least equal fair market value and of reasonably equivalent usefulness and location."


This appears to reflect a finding of some degree of harm, of more than de minimis impact on Wallace Marine Park, and could have implications for the current round of 4(f) evaluation. It's not clear whether the Land and Water Conservation Fund Act remains relevant or binding here. 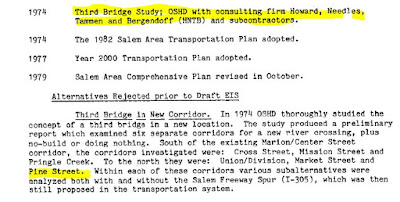 It's not like there's any smoking gun or "gotcha" moment here, but it is interesting that:
* Neither this 1980 study nor the 1974 one is posted to any of the SRC sites, nor have they been digitized and made available via google books. They are also cited in public comment submitted during the UGB Hearing process.

Here's a minor mystery. The 1974 study rejected a crossing on a Pine Street alignment.

But according to a map in the Findings Report from the 1975 Comprehensive Plan, a Pine Street alignment was retained!

So that switch would also be interesting to learn more about.

Aren't all of these documents archived somewhere?

Between 2008 and 2013, the combination of the recession, 9% unemployment in Polk County, fluctuations in gas prices, and a large drop in new development in West Salem resulted in a flattening of AWD traffic volumes over the bridges to an average of 89,000. Traffic counts began increasing again in 2014. According to recent ODOT count data for the bridges, the 2016 AWD count was 98,465, an increase of 7,000 over the 2014 AWD count.

Not surprisingly, traffic counts in the winter months are lower than the yearly averages, and conversely summer months are higher than average. In 2016, AWD (Mon-Friday) counts were over 100,000 for every month between April to October.

Thanks for the clarification on AWD v. ADT.

It's interesting that traffic modeling doesn't use the same unit of measurement consistently - almost as if they wanted to make comparison and analysis as difficult at possible!

It would be helpful for the MPO to publish an explainer on traffic modeling for interested citizens and electeds. It could also explain statistically significant margins of error and the difference between a credible forecast and an incredible one. It would be helpful to have the standards there made explicit so people can evaluate forecasts. (Does such a thing already exist? If so, it's certainly not widely known.)

All too often it seems as though the modeling is mystified in order to insulate it from criticism and analysis.

Also, the "flattening" started well before 2008! A 2008 start has been disproved multiple times. (Here's one post on that, which includes data from the Federal Reserve on driving and recessions.) It was not a product of the recession. That has become, it seems, a convenient fiction that again effectively serves to insulate modeling from criticism or revision.

The uptick in driving appears to coincide strongly with the fall of gas prices (here's another chart from the Federal Reserve that shows the uptick when gas fell below $3/gallon), and it seems likely that the current modeling is not sufficiently sensitive to changes in gas pricing.

Traffic planners and engineers use various metrics depending on what issue is under review. Sometimes we can simply compare ADTs in different areas of the state to get a relative magnitude of traffic in different locations. But when examining a specific roadway, it is often useful to look at Average Weekday Traffic, A.M. peak traffic, P.M. peak traffic, etc.

An analogy would be the CEO of an amusement park (Disneyland, Great America, etc.). A CEO would want to look at total yearly attendance, seasonal attendance, attendance during different parts of the day, all depending on what analysis is needed at the time (big financial pictures, staffing levels for different seasons or staff needs for morning vs. afternoon shift, etc.)

For my post I was not looking at national trends.

The national trends you linked to show an increase in VMT/population until the mid-2000s (you can make a case they flattened during the 2005-2008 period) and then a sharp decline from 2008 to 2014, and then an increase from 2014 to the present.

The patterns on the bridge are similar (and I'm going to use ADT here, since I have that data in front of me): from 1991 to 2000, ADT increase by 2000 vehicles on the bridges each year. But between 2000 and 2006 the yearly increase was only about 1300 vehicles each year, showing a slowing down of growth. Then between 2008 and 2013, ADT on the bridges stayed at approximately 85,000 (with some fluctuations). That coincides with the recession, with the Polk County's and Marion County's rise in unemployment, and with a substantial decline in building permits and development in West Salem (for the years 1995 to 2006, building permits averaged about 300 units per year [more than that in 2004-2006], then dropped to about 50 per year from 2008 to 2011). There are other factors at play in the overall changes in VMT and bridge volumes, such as personal income & "disposable income" & net worth, changes in millennial's choices to drive, growing use of the internet, and local land use changes (e.g. when West Salem High school opened in 2002 and high schoolers in West Salem didn't need to attend South or North High). What I'm saying is that many factors led to changes in VMT and bridge volumes, not just gas prices.

But, if we want to discuss gas prices separate from other factors, I can agree that driving does decrease some when gas prices increase but the relation is inelastic (meaning that a sharp change in gas prices will have a more gradual change in driving. That's because: 1) gas is obviously not the only cost for driving (sunk vehicle costs, insurance, maintenance, registration, etc.); 2) if the increase is high enough and sustaining, some people will gravitate to more fuel efficient vehicles [and drive just as much] while others will use non-auto modes more often; and combinations of the two 3) despite the cost of gas, most people need to travel for work or other needs. [If the price of apples doubled, I could choose to pay the higher prices, use it less, or even give it up entirely without big ramifications to my life; the same can't be said about going to work to earn a living, which would have big ramifications].