Also on the agenda for next week's Planning Commission is a Public Hearing for the proposed IKE Box move. They might not yet have the funds raised - of course they might also! - but the time line is such that this process would need to happen in advance of the move with or without the funding.

It looks like it should be straight forward, though there are several instances of 5-foot setbacks for which exceptions are needed, a reduction in parking stalls, and a reduction in landscaping requirements. There is code sludge to shovel here!


Many of these look like instances where our code for downtown has been suburbanized to some degree, and we no longer expect that downtown will look like the older streetcar district with buildings flush to the sidewalks and without big gaps between buildings for surface parking lots.

Sometimes code looks like it works to improve projects where developers want to cut corners or to make something that does not contribute to the urban fabric.

This looks like an instance where it might actually be working against the project and something that creates additional red tape. All these exceptions look reasonable, even desirable - like they shouldn't be "exceptions" but should be "expectations."

Fortunately, the Staff Report identifies no significant problems and takes a very common-sense approach. So then the question will be if there is citizen complaint about any of it.

Still, one item for question. The drawings show good quality staple racks, but only two of them. Two bike racks seems stingy for a coffee house and community gathering place. You might remember the campaign in 2012 for new bike racks. They got new racks, but still the "wheel-bender" comb type, and still with more capacity.

However, the Staff Report says there will be eight of them. "As shown on the proposed site plan...a total of 8 bicycle parking spaces are provided...." But the drawing doesn't show eight. This is a tension that might need some attention! 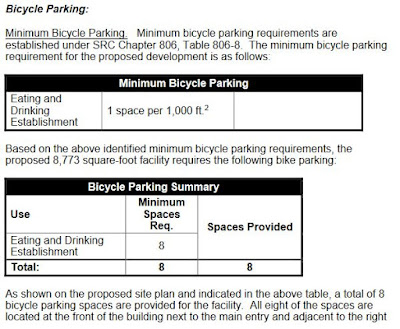 As for the proposed car parking lot, the Staff Report has a very level-headed assessment:


The proposal is providing 10 new parking spaces; however, the code requires a minimum of 36. The relocation of Ike Box is utilizing the existing building which has been its home since 2004 and is an intrinsic part of the community. The Ike Box currently is located in conjunction with the YMCA and provides no off-street parking for the eating and drinking establishment. The existing building has a basement, which makes it much larger than the building will be once it is moved. The 10 spaces will be an added due to the relocation and will make the parking for the business overall better. Many of the Ike Box’s customers work in the area and walk rather than drive. The new site about 250 feet away will have no impact to their existing customer base as adequate on-street parking is available in this area so customers who do drive will continue to utilize available on street parking in the same manner as they are accustomed.

The proposed relocation is just outside of the downtown parking district where no parking would be required for the proposed use. Since the Ike Box will be providing more parking for the current customer base, the proposed development equally meets the intent of the standard.

There's also some reasonable reductions in landscaping requirements for the parking lot.

Altogether, the proposal looks reasonable and the City's analysis looks reasonable. It's a very common-sense approach to interpreting code and the requests for exceptions. Hopefully it will all come together!

Buried in HB 5050, there's a good bit of pork for Salem, a couple of them benefiting the YMCA, for which Senator Courtney has been a special patron (not just as customer, but in the older sense of a patron-client relation):

The amphitheater and mural have got a little bit of mention in the press, but I don't think I've seen anything about the Center for Hope & Safety.

The last thing isn't specifically for Salem or the Salem-area, but it looks suspiciously like a program aimed to support our struggling sobering center?

It's hard not to think that the fingerprints of Senator Courtney aren't all over these.
Posted by Salem Breakfast on Bikes at 7:45 AM

As of this moment, the IKE Box fundraising project at Crowdrise is at about 9% of goal. So they have a ways to go yet.

First Pres will sell the empty lot to the Y for veterans housing, and the Ike Box will stay and buy their existing lot and property from the Y.