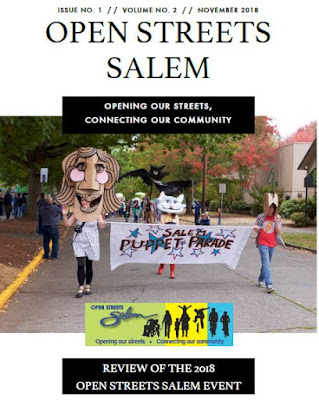 A little buried in the minutes from the June SESNA meeting is sad news that Open Streets Salem has been postponed this year.

This is not wholly surprising. The event was supposed to be in September, and there has been a long silence this spring and early summer. In Portland and Eugene the schedule and routes for this year have long been published. On social media Open Streets Salem has hardly posted or published anything this year. With neither formal nor informal kinds of communication, it seemed likely that there were difficulties.

Indeed there were. Shoot.

In the minutes the reason for the postponement is "struggling to close routes." It would be interesting and helpful to learn more about the source of friction. Is it at the City? Is the City refusing to support the event in some way? Is it neighbors who do not see value in closing the streets for walking and biking? Are they creating static? What streets are contested? Is it a bigger street like State Street? Or just neighborhood streets? What's going on here?

And are the problems more than merely technical details for negotiation? Is there some way the event needs fundamentally to be reshaped?

This hiccuping suggests a more consistent pattern, arising from deeper things than merely the vicissitudes of volunteer organizing on a shoestring budget.

From here it has always seemed like the event's routes were too small, and too much on streets already quiet. If the event has been pushed off to the side into quiet neighborhoods, especially as a way to avoid impacts to car traffic, then it might not be surprising it has not built momentum and popularity.

It has seemed like as an "open streets" event, it should lean harder into closing busy streets to cars and creating a real lure in "car-free streets." If car-free is any draw, that is in contrast with car-full.

Car-free on a quiet neighborhood street that only sees a few hundred trips a day is not different enough.

Downtown, On Your Feet Friday has seemed for several years to be an event begging for some closed-street action. Maybe there are ways the two events can merge or leverage each other.

Perhaps there will be more to say as additional information comes out. An entirely different set of struggles could be behind the latest pause, and this is mainly speculation here. Still, it is troubling that the event has not proved more popular, and this suggests greater course-correction and stronger institutional support, especially from the City, may be necessary.

Alternately, if neighbors really resist the concept, more should be written about why it is not getting support. The survey and event assessment has been mostly positive, but the difficulty in consistently putting on the event suggests a more ambiguous picture.

For previous notes over the years, see here.

Separately, keyed to the launch of weekend service for Cherriots on September 7th, there appears to be plans for a smaller event. The notes from SESNA suggest the latest down-sizing will not include Aldrich Park even. You can see here the interest in "low traffic streets" and, in the lack of contrast with streets full of cars, again this somewhat defeats the purpose of an open streets event.

It will be interesting to see what is the final shape for any event bolted-on to the larger Cherriots celebration on the 7th.
Posted by Salem Breakfast on Bikes at 12:15 PM