The New Yorker on Autoism 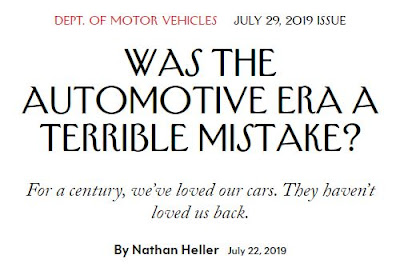 In a long survey of recent books, the New Yorker looks at some of the costs of our 20th century autoism.

The piece is more nuanced than a simple declaration that "yes, the automotive era was a mistake." The headline's a little clickbaity in that regard.


There are two strong claims in favor of the idea that our century-long adventure in owning and crashing gasoline cars was, although not perfect, a step forward. The first is infrastructural: cars let Americans cross cities, states, woods, mountains, deserts, and, ultimately, the nation in reasonable time. Cities and towns thrived with the flow. The second is cultural: the idea that car travel conjugates American life in its healthiest and most distinctive forms. Both arguments took root in the two-decade period after the Second World War.

But most of the piece is about the costs of our autoism, about the ways our cars don't love us back.

It's a good essay and review of some recent literature. Check it out.
Posted by Salem Breakfast on Bikes at 12:15 PM