With yesterday's astroturfed protest taking over downtown, a story about coastal communities and rising sea level was especially apt.

But the media went in on a kind of false equivalence and devoted too much laudatory attention to it, and today's story is disconnected from that story about King Tides, or other recent stories about crab shells and ocean acidification and about wine grapes and vineyards.

The media seemed to be approaching the wasteful, polluting, and intimidating trucks as a marvelous spectacle, worth saturation coverage. People then misunderstood the coverage for support.

It is not at all clear that the protesters want to negotiate in good faith over ways to improve the Cap and Trade Legislation or to offer any other bill to reduce emissions. They aren't saying, "Hey everybody, we have a different bill, a completely revenue-neutral concept, one that doesn't grow the government, that the Ds aren't taking seriously. We recognize the urgency and scientific consensus around greenhouse gas pollution, and we think we have a better way of attacking it." Nope they offer nothing. They are merely nullifiers who want to cancel the bill. They are more like vandals and arsonists, and the press should neither normalize this nullification nor celebrate the intimidation with a false equivalence.

It is also interesting that the trucks blocking traffic, making noise, and polluting masquerade as "normal" traffic and not anything that needs a permit. If people on foot were doing this, they would need a parade permit. If they also had wood-burning stoves with the equivalent particulate emissions, the DEQ would be all over it. The tolerance for the trucks, their size, their congestion, and their pollution is an instance of our indirect subsidy for autoism. A Salem Reporter piece quoted Salem Police:


Lt. Treven Upkes, spokesman for Salem Police Department, said that there won’t be any road closures associated with the event and that organizers didn’t need a permit.

Our 350.org chapter has information about Saturday's Hearing and follow them for more.

It turns out the protesters do have a whiff of a platform. From Salem Reporter:


[The group wants] the state to plant trees along roads to act as carbon sinks and wants state government agencies to buy goods and services locally to reduce their carbon footprint. It also wants Oregon to boost its recycling infrastructure and allow businesses to write off more quickly the costs of upgrading to greener technology....

Planting trees and more recycling will not scale, and by themselves are mainly ornamental. In fact, they are virtue-signalling rather than substantive! This is more evidence the protesters are not serious and just want to nullify.

Moreover, conservative economists have argued a Pigouvian tax is the right way to achieve a market-oriented solution, and the press is failing when they do not push back on the rejection of it, especially when by supposed "conservatives," and instead resort to he-said, she-said false equivalence.


THERE is a time for weighing evidence and a time for acting. And if there’s one thing I’ve learned throughout my work in finance, government and conservation, it is to act before problems become too big to manage.

For too many years, we failed to rein in the excesses building up in the nation’s financial markets. When the credit bubble burst in 2008, the damage was devastating. Millions suffered. Many still do.

We’re making the same mistake today with climate change. We’re staring down a climate bubble that poses enormous risks to both our environment and economy. The warning signs are clear and growing more urgent as the risks go unchecked.

This is a crisis we can’t afford to ignore. I feel as if I’m watching as we fly in slow motion on a collision course toward a giant mountain. We can see the crash coming, and yet we’re sitting on our hands rather than altering course.

We need to act now, even though there is much disagreement, including from members of my own Republican Party, on how to address this issue while remaining economically competitive. They’re right to consider the economic implications. But we must not lose sight of the profound economic risks of doing nothing.

The solution can be a fundamentally conservative one that will empower the marketplace to find the most efficient response. We can do this by putting a price on emissions of carbon dioxide — a carbon tax. Few in the United States now pay to emit this potent greenhouse gas into the atmosphere we all share. Putting a price on emissions will create incentives to develop new, cleaner energy technologies. 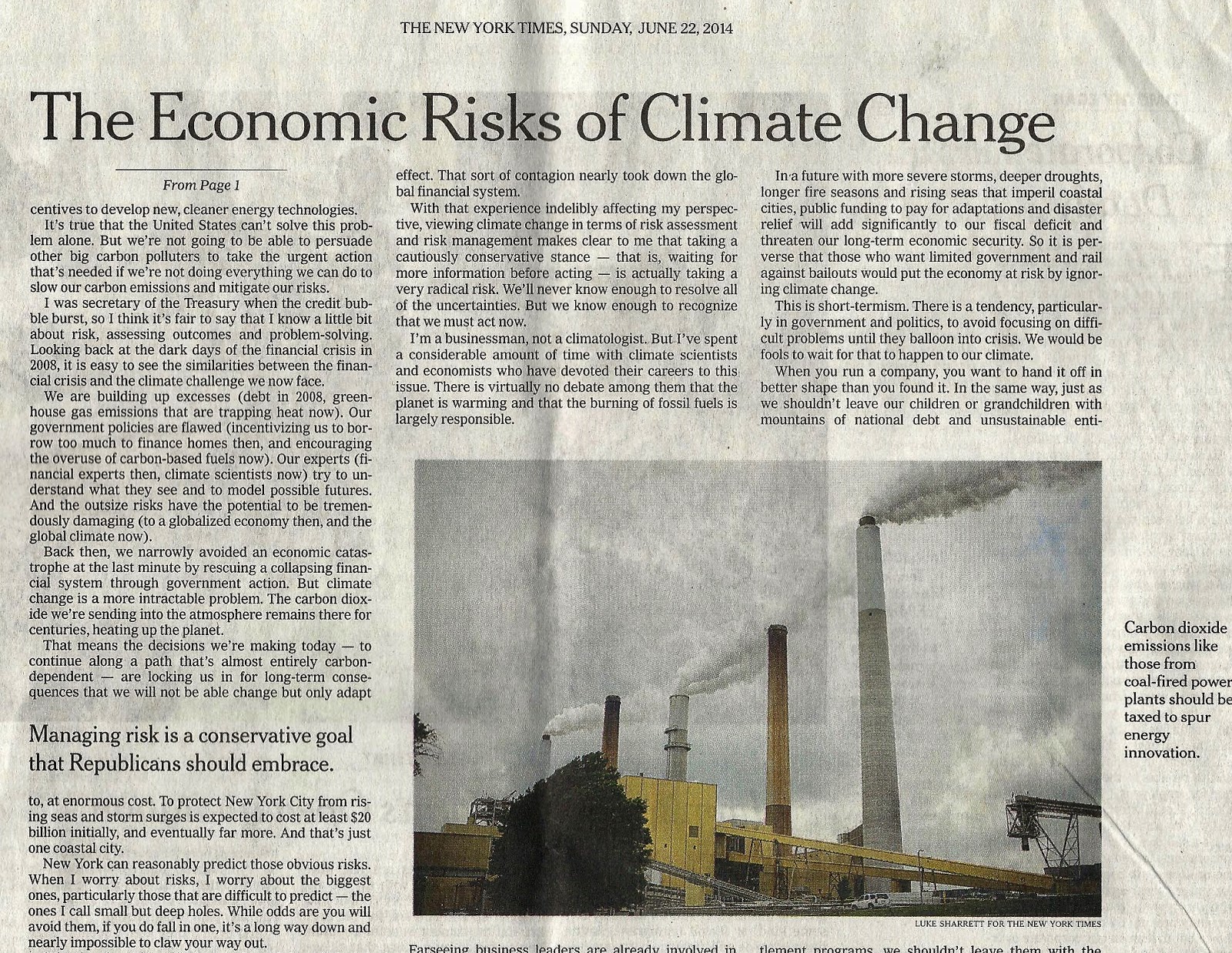 The deal turned out not to offer leverage, and the Nullifiers succeeded.

Updated with comment on the supposed alternative the protesters want to offer.

(And updated with a couple of clips on the logging deal)

OPB is suggesting that there might not be leverage -

“What they basically said is if you want the timber industry’s pesticide bill to pass, you’re going to have to stick around for cap-and-trade. And we simply can’t do that,” Baertschiger told conservative radio host Lars Larson Thursday. “So the timber industry didn’t do us any favor. I don’t know who was advising them politically, but I would give them their walking papers.”'

The other day Salem Reporter wrote an apologia with reader testimonials. But the one they chose to end on was from Bill Sizemore.

If you are appealing to his sense that you are neutral, you are far from neutral!

The Nullifiers blew up everything. Only 3 minor bills passed both Chambers. Updated with RG clip for SJ story.