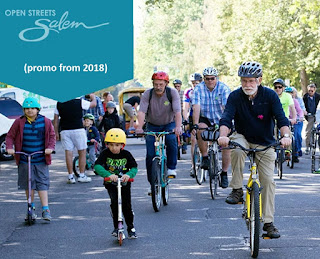 At Council on Monday, Councilor Stapleton will make a motion for

a report to City Council regarding the feasibility of closing Union Street from...Riverfront Park to Winter Street and Winter Street from Union to Market Street on Saturdays May through October to support a safe, livable, and sustainable city, with thriving economy and a vibrant community.

That is a great idea!

It combines a little of the playful notions in a Ciclovia style Open Street event with more pragmatic notions of making it easier for non-auto travel to the Saturday Market.

By making it regularly periodic, people will figure out how to work it into their own routines. A one-time special event, like Salem's on-and-off Open Street attempts, is harder to work into a family's habit and routine. This is a good move for a revival in a new form.

The regularity also will allow it to breathe, with periods of higher use and periods of slack use. If we don't pile all our expectations onto a one-time event, if we don't necessarily hope to see large numbers of people at all times on the course, then we can give it space to grow its own identity and rhythms.

A regular event will cultivate popup and other spontaneous or organic activity. Give people time, and they will figure out how to use it with their own creativity.

Finally, it will also be associated with commercial activity and may provide a way to move open streets from quiet residential streets to busier streets as they do in the rest of the world.

Many of the intersections are controlled with stop signs or traffic lights, and the only one that might need special attention is Union at Liberty. But, again, as an on-going event, it's not necessary to figure out the one best solution right off, but it can be tinkered with in an iterative way, with a goal of optimizing it for July, August, and September, and trialing it in May and June.

All over the world there was a burst of new biking and walking associated with the Pandemic, but here in Salem we created no new popup bike lanes or did anything formal to cultivate it. It's not too late to work with that energy and interest, and that's another reason to commit to a regular and periodic project like this. Our Climate needs are a compelling argument to leverage the boomlet into an enduring boom.

On rhetoric, we might stress the "open" element more than the "closed" aspect. If we are closing streets to cars, we are also opening them to more people and families, and the stress on making streets useful and available to larger numbers of people, not just those encased in big machines, can be helpful in introducing the idea and selling it.

The City should commit to this as a real project over the whole market season.

Please submit this analysis to City Council as part of formal testimony.
Thank you.

Apparently this concept is not very important for the City. In yesterday's update from the City Manager, he writes:

"An information report, as requested by City Council, on closing Union and Winter streets on Saturdays during the Saturday Market will be on the June 28 council meeting agenda."

The inherent gap between information report and any subsequent action makes it unlikely for much to happen here. This looks like the City slow-walking the proposal.