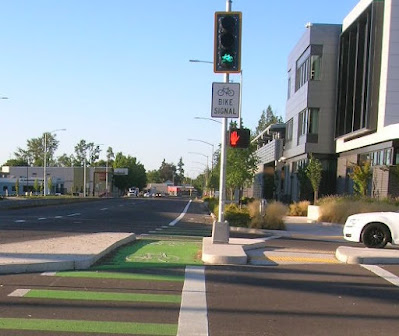 The City really wanted us all to think well of the changes they were making in order to have Division Street two-way at the Police Station.

Last year in a release the City announced the changes as "improvements":

The City had a great opportunity to fix the compound intersection at Front/Division/Commercial for people on foot and on bike, especially with its proximity to the new UGM facility, whose clients will rarely be driving, but the City did not do this. At the very least they substituted one set of problems for another. But more, they may have made the existing Charlie Foxtrot even more foxtrotted up. (Remember the chicken crash in 2013?)

Earlier in 2019 during the debate over the street tree removal along Division, the City had published some drawings for Liberty and Division, but they minimized the amount of information for west side of things with Division, Commercial, and Front. At the time it seemed like details were just still being worked out, and that they would fix things.

That may have been true, but they might also have been minimizing detail because they knew it would be messed up. The fact that State Highways and the Marion/Center street bridges are here also mean ODOT was involved, and we know how fundamentally hostile they remain to non-auto travel. In the materials for the Congestion Relief Task Force, the intersection was identified as "at or near standards." But for whom? For people on foot and on bike it does not at all function well.

Last year in the middle of the Pandemic, a reader passed through the intersection and sent along to the City these comments. They wrote from the perspective of an expert long-distance cyclist, used to biking on high speed roads. What they saw as an "easy, safe route" was not always that, and the intersection did not function for people who were new to biking or biked casually. (See the red on the bike map clip above.) It was always a long, unprotected bike lane exposed to zoomy urban traffic at arterial speeds, and did not meet any all-ages-and-abilities standard. (Again, see the chicken crash!) Still, they are right about the kudgey work-around and the failure to make things better:

The redesign of the intersection near the new police station at Commercial and Division has converted what was an easy, safe route with bike lanes to a bizarre two crosswalk crossing that subjects bicyclists to cross traffic. Previously, northbound cyclists could navigate the intersection in a bike lane that allowed them to move with the flow of motor vehicle traffic. Now, the expensive "improvements" at the intersection would prompt them to cross Commercial street in a crosswalk, make a sharp left turn on the sidewalk, and then be confronted by another crosswalk. In both cases, the bicyclists will be crossing the potential paths of motorists whose attention is likely to be focused on motor vehicles approaching from the opposite direction. It is really sad that a city that ostensibly is trying to improve bicycling is spending so much money to make things worse for bicyclists.

Here's a detail of the plan from March 2019. Again, it's worth underscoring that the plan drawing is not very detailed, at least at a high enough resolution to make out the detail, there's barely any indication of any green bike lanes, and it's buried in a Staff Report on tree removal to the Salem Parks and Recreation Board. It was never published as upcoming transportation plans, and it was never offered to the bicycling public generally for comment or critique. Only now with the completed construction is it possible to parse out the plan drawing. It it hard not to suppose it was never intended for people to understand before the construction.

At A, after a tricky, even dangerous, weave across a right-turning slip lane, the bike lane terminates into a pedestrian refuge island.

The weave across the slip lane already disqualifies this as any "improvement." The green striping ostensibly signals a more comfortable bike lane, something inviting to less experienced bike travelers, but there's already this tricky maneuver that requires some level of expertise.

In the refuge island, a bike lane marking shows a veer to the right. At B there is a green bike channel and green striped crossbike.

Then there is a sharp, 90-degree left hand turn fully on the sidewalk, a section of sidewalk biking, and at C another bike channel and green striped crossbike across Division, through another pedestrian refuge, another slip lane, and then back to the bike lane northbound on Commercial.

Here's the same drawing, this time with the conflict points and what had been the old sweep of the previous bike lane in yellow. A person taking the lane might still choose to follow that line through the intersection, though they would have to pedal pretty fast.

Either way, whether you take the lane or use the sidewalkification and green crossbikes,  people biking are treated as very second-class road users, to be fit in later, after people driving get preferential treatment in this redesign. And the crossbikes still don't remove the conflict and offer great protection against swooping, zooming turns that drivers might make. Squared off turns that have to be made at slower automobile speed would have been safer.

Moreover, there's still no southbound bike lane into downtown. (I think there's a funded project for these in the pipeline, however. But it's significant they were not coordinated more.)

And if you were just on foot and wanted to travel between the Police Station and the UGM, you'd have to use FIVE SEPARATE crosswalks and perhaps even five discrete signal phases.

The "improvements" are no better for people on foot.

All in all, if we wanted to make non-auto travel more convenient as a way to reduce emissions and improve safety, we leaned away and failed. Nothing about the project will entice new people to try to bike north from Front onto Commercial Street here. It only serves those who were already willing to use the existing bike lane, and it does so only in the space left after first accommodating cars and their drivers. It's not very intuitive, and there's no gain in function. That they had to cannibalize sidewalk space is wholly symptomatic of priorities.

This is the kind of autoist engineering we have to cease. If we want to make inroads on our transportation emissions, as well as reducing death and serious injury, we have to start giving priority to non-auto travelers, and to fit the cars and their drivers in as the afterthought.

You nailed the problem--the road planners continue to think about how to speed up motor vehicle traffic and, only after having designed for that objective, then start figuring out how to shoehorn bicyclist and pedestrian traffic in as cheaply as possible. The end result is a design that is at best inconvenient for bicyclists and pedestrians and at worst completely unworkable. Then the road planners wonder why bicyclists and pedestrians don't use the facilities provided. The folks I know (experienced cyclists) take the lane, just as we always have done.

They should have put in roundabouts. And since the UGM building was going in at approximately the same time they could have fixed the intersection so all of the streets lined up better.

I also think that Commercial Street should have been narrowed to 3 lanes ( better 2) going south and 2 lanes going north.