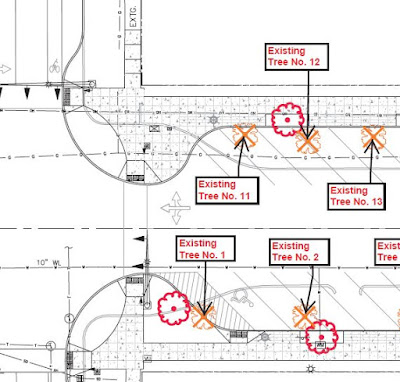 On Thursday the 14th the Parks and Recreation Advisory Board will conduct a Public Hearing on the proposal to remove trees on Division Street between Liberty and High in a project related to the new Police Station.

One of the reasons adduced for the removal is the prospect of new bike lanes on Liberty Street, which would result "in a reduction of available on-street parking." So the City proposes to hollow out the curb strip, and install new angle parking where there was parallel parking before.
Over on Facebook, tree advocates have posted more information and have rightly suggested that we should no longer routinely countenance trading mature trees for new parking in the public right-of-way. At this moment, maintaining tree canopy is a higher value than adding to the stock of subsidized car storage.

It also seems relevant that there are no bike lanes proposed for Division Street, where the trees are proposed to be removed. The bike lanes are actually on Liberty Street, a little distant from the trees in question. Removing trees on Division gains no space directly for any new proposed bike lanes. The relationship the City posits between tree removal and new bike lanes is much less direct.

So let's look at what appear to be a cascading set of changes just off Division Street. Because these changes affect other projects, they deserve more notice and analysis. The City has been very quiet about them. One of the biggest is extending two-way sections on Liberty and Division here. The Division Street bit seems unproblematic, but Liberty bit seems more complicated, and it impacts the Union Street greenway. The bike lanes on Liberty Street also terminate awkwardly and do not connect adequately with the wider network. Overall the project appears autoist, with bike travel very secondary and not at all integral.

Liberty at Union Street is very wide, but because of turn lanes and the parking garage, there are effectively only two travel lanes, and this makes the crossing distance much shorter than on Commercial. For a decade now Union Street bikeway/greenway concepts have used this slack to make it easier to cross Liberty here.

But the rendering in the Staff Report for the tree removal shows none of this.

It is concerning in two ways:
While there might now be a traffic light at this intersection - the drawing doesn't explicitly call this out - it does not look like there is a "family-friendly" treatment for those crossing on foot or on bike. The Police Station projects look disconnected from the Union Street Greenway project, and potentially adversely impacting it.

And at Division Street, there is no entry to the bike lane.

The southbound bike lane on Liberty, then, is a two-block segment utterly disconnected from the rest of the bike network.

While the proposal to cut trees contains the words "new bike lanes," there is little about these bike lanes to make them greatly useful. They are Potemkin bike lanes, mainly for show and used instrumentally to greenwash other aspects of the project. This looks more like random bike lane striping than a part of any plan for enhanced bike connectivity downtown.

Altogether there is insufficient detail to support a trade-off of trees for bike lanes.

And anyway, this is not a trade-off we should ever generally want to make. If we want to increase our tree canopy, and decrease driving and the amount of subsidized space we allocate for car storage, the proper trade-off is to reduce parking for new bike lanes.

The Police Station project overall seems too independent of other transportation goals and projects and it needs more carefully to be knit into the wider projects for downtown mobility. At the very least, the City needs to publish an analysis for the traffic changes and not simply assert in breezy "building buzz" videos that they will be great.

Also in the meeting packet:
The Parks and Recreation Board meets Thursday the 14th at 5:30pm at the Library, downstairs in the Anderson meeting rooms.
Posted by Salem Breakfast on Bikes at 12:01 PM

The weekly City Manager's update has this on the tree decision: