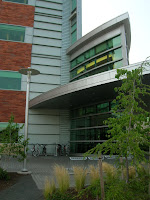 An unplanned visit to the emergency room today (the patient returned home ok) created an opportunity to evaluate the parking as a customer. Its location was not obvious, and it appeared to be at capacity. But otherwise it was pretty nice.

The racks are under a overhang and get a little shelter. Inside, behind the glazed prow - looks like a ship's prow to me! - there was a piano and seating. Outside, around the pavers were several benches. It's nice parking mostly.

The drawbacks? Not near either of the entries, so I had to ask security for directions. I understand improved signage is on the way (see below).

It also looks like more staple racks are needed. There were six bikes locked to four staple racks. I also saw two other bikes elsewhere. So eight bikes for four racks is capacity.

Does the hospital need more?

As of now, staff and physicians can use their badge for entry into an enclosed room in the first floor of the parking garage, where there are about a dozen wire cages, a bank of lockers and a heater for winter. The new building has car parking in the basement, and along one wall there is a fenced cage with badge access, inside of which are 30 enclosed bike lockers. Interested regular bike commuters can be issued a key by security.

Under the Center for Outpatient Medicine, accessible to the general public, there is a bike cabinet that holds four bikes completely enclosed, secured with a personal padlock, and a row of staple racks. There are also several staple racks and wire cages around the old hospital building. Showers for staff are available in the old OR locker rooms, and in about a year we are supposed to have a locker room with showers in the basement of the new tower, next to the bike cage. New versions of the hospital campus map are to show bike parking areas, and there will be appropropriate signage.

We'll try to get photos and more on the employee situation.
Posted by Salem Breakfast on Bikes at 11:30 PM