Some Good News amidst the Rivercrossing Hooey

During the alternatives development process, a stand-alone Transportation System Management and Transportation Demand Management (TSM/TDM) alternative was studied and determined not to meet the project Purpose and Need all by itself....To make sure the Salem River Crossing project still supports the goal of decreasing single-occupancy vehicle travel across the river, the project team is pursuing the following approach.

First, the Draft EIS will assume that the future demand (year 2031) for vehicle trips across the river is 8% less than otherwise forecast. Basing the project design on a reduced traffic volume anticipates a high degree of success in increasing non-auto travel across the river and also helps prevent the project from being overbuilt.

Fortunately, the hooey is also generating a project that stands to do some good: 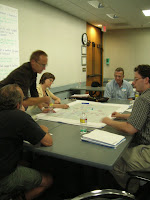 In late June and again in early July, the Alternate Modes Study study group met twice to discuss ways to reduce congestion. At the second meeting, a charette, about fifteen community activists representing pedestrian, bicycling, transit, and rideshare interests split up into three groups to plot solutions and ideas on maps of Salem. Each group rotated and spent time at each of three map discussions: Bike/Ped, Transit, Carpool/Vanpool. 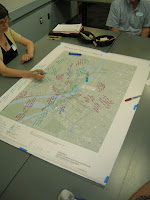 These photos are taken at the Bike/Ped table. Rory Renfro and Jessica Roberts from Alta Planning + Design led the discussion. Alta is a national leader in bicycle planning, and they will push for bicycles as well as anyone can.

(For a more skeptical view, which really zeros in on the hooey, see the excellent and passionately argued posts at LoveSalem.)
Posted by Salem Breakfast on Bikes at 6:50 PM