On Monday, when it opens, the Chemeketa Community College Center for Business and Industry will be a LEED Silver building. But if you look for green transportation solutions, you might be scratching your head.


The greater of 4 spaces or 1 space per 10,000 square feet of gross building floor area. 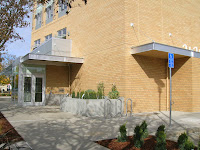 For the CBI building the bike parking is hidden in the back. The wave rack*, not recommended by the Association of Pedestrian and Bicycle Professionals (APBP), is also installed out from the wall, seemingly and strangely placed so it is not under the metal awning. 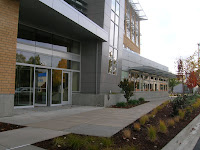 At the main entry, where the parking would be most convenient and easy to find, there is no sign that bikes will be expected.

And there's plenty of great awning that could shelter bikes and send the message that bikes are a great way to get around town. 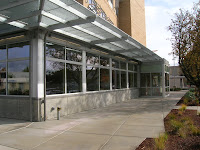 Here is the south side of the corner at Union and High. It's just on the other side of the back entry where the bike parking was installed. 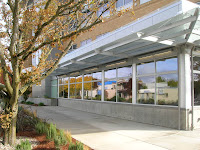 And here is the west side of that same corner. This is the closest to the main entry on High, and is the most logical place for bike parking.

This isn't the only new building where bikes seem to be an afterthought.

Back in April the Broadway Town Square project at Market and Broadway NE opened. On a transportation email list there was a lively exchange: 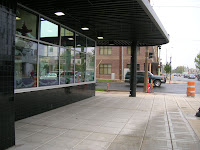 love the new Salem Cinema, as I loved the old one, and I'm enjoying the Salem Film Festival's fourth year a good deal. It's wonderful, mainly. There's a nice little bistro space so you can pull up on your bike, go into the theatre, and your bike will be right where a lot of people can see it, an important security feature. 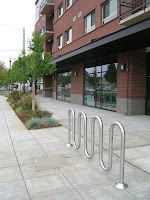 Except . . . that there is no provision -- none -- for bike parking at the Cinema! Zero!! The nearest bike rack is south of the theatre, in front of empty apartment buildings. In other words, if you ride your bike to the new Salem Cinema, you won't be locking it up anyplace secure that has people keeping an eye on it.... 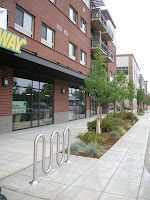 In response another wrote:


the south building has 4 wave racks at each corner; the Cinema building has zero; and the Y building in the next block north also has zero. I really hope the code isn't so minimal that the buildings are compliant for bike parking! 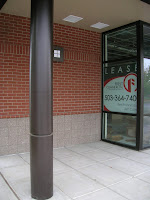 Interestingly, the corner bike parking could have been positioned here, under the awning, next to a window, and near a lighting sconce. Security, visibility, shelter. Perfect. Instead there's a void, empty space.

Arbuckle Costic designed both buildings. To an email asking about their approach to bicycle parking, principal Kim Arbuckle said


We include bike parking to meet the code requirements but have found little use of most of these installations in the building we have done.

Unfortunately, we have the ingredients for a self-fulfilling prophecy here. One of the reasons the bike parking is little used is because it's not very good bike parking.

The APBP recommends staple type racks rather than wave racks. They say


Wave style racks are not recommended. Bicyclists commonly use a “wave” rack as if it were a single inverted “U.” This limits the actual capacity of the rack to two bikes regardless of the potential or stated capacity. Bicycles parked perpendicular to a wave rack (as intended by the manufacturer) are not supported in two places and are more likely to fall over in the rack. The advertised capacity of a wave rack is usually much higher than the practical capacity.


If possible, the rack area should be protected from the elements. Racks along building walls can be sheltered by an awning. Even though cyclists are exposed to sun, rain, and snow while en route, covering the rack area keeps the cyclist more comfortable while parking, locking the bike, and loading or unloading cargo. An awning will also help keep the bicycle dry, especially the saddle.

Finally, the APBP recommends that racks be installed near entries.


The location of a rack area in relationship to the building it serves is very important. The best location for a rack area is immediately adjacent to the entrance it serves....Racks that are far from the entrance, hard to find, or perceived to be vulnerable to vandalism will not be used by most cyclists.

The racks at the CBI and at the Broadway project apparently fulfill code requirements, although in one regard they don't appear to satisfy the spirit. Code requires that


Bicycle parking shall be provided within a convenient distance of, and clearly visible from the primary building entrance as determined by the City. Such parking shall not be further than 50 feet from the public entrance to the building.

Certainly at the CBI building, the bike parking is neither clearly visible from the primary building entrance or within 50 feet of it, as the bike parking is in back off of Union rather than near the official address and main entry of 626 High St. NE. Perhaps the entry off of Union is the official "primary entry," though this would be counter-intuitive. The bike parking at Salem Cinema is similarly distant, though it's less clear what is the "primary entry" for its building.

In any event, two installations of bike parking do not meet the guidelines of the APBP. It shouldn't be a mystery why bike parking like this isn't used as much as it could be.

*The wave rack at Indigo Wellness was salvaged, so as a reuse project it should be exempt from the APBP guidelines!

You're straining to be kind, but there's absolutely no question as to what the primary entrance for Salem Cinema is -- it's the one door they open for you when you want to attend a movie, just to the north of the ticket window and to the south of the bistro and the nice covered space where the people in the bistro seating could enjoy watching the bikes . . . except that there are no bike racks there.

This difference may matter. Salem Cinema is in the northern part of a building with two footprints connected by a bridge. It's at least plausible that the "primary entrance" so far as code was concerned is located on the southern footprint.

That's why the fussy distinction between spirit and letter.

We'll try to find out more about code and the particulars of compliance here.

Hey, here's an idea. The City is sending around notices to
"neighborhood associations, civic groups, schools" to "seek[] your input to identify high-priority locations that need bicycle or pedestrian safety improvements" ($1.2M for bikes, $400k for peds) using money from the streets bond.

Proposals are due 12/31 to Julie Warncke.

How about we just look at the last ten construction projects in Salem and propose fixing them to be usable for bikes and peds?

Well...the call for ideas also specifies that ways to parks and schools would receive priority. I don't think anyone would argue these are bad priorities. I think most of us just believe they should be higher priorities with a larger proportion of funding.

updated with photo identifying main entry as the one on high street.