The Vision 2020 Bicycle and Pedestrian Connections Workgroup met on Wednesday, and we got confirmation that the downtown Commercial restriping plan will finally go to City Council on November 9th!

Lots of people have been working on it, and it has twisted and turned. The plan that is on the table (staff report here) enjoys a broad range of support, and while it is not perfect, the breadth of support should make for a stronger execution and set the table for future projects. This looks like real progress!

These groups were not all in support of the previous plan, and there is still considerable opposition to bike lanes on Commercial. But since bicyclists are themselves in many cases not persuaded that bike lanes here are best, it's not valid to conclude that merchants oppose bike lanes generally. Angle parking is a problem in many ways, and underlies much of the concern - though different parties value the angle parking very differently. 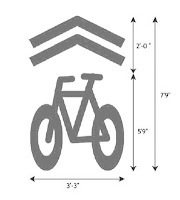 The plan is for lane reduction + sharrows. It will reduce Commercial from 4 to 3 lanes, and add sharrow markings on the outside lanes. The cross-section will have five segments: a 15 foot parking strip, 15 foot shared lane, 11 foot travel lane, 15 foot shared lane, and another 15 foot parking. The outer lanes with sharrows will be extra wide, allowing for flexibility in auto and bike positioning in the lane.

Here is a comparison of existing conditions and the proposed cross-section.

The use of sharrows on a high volume street like Commercial is perhaps stretching the customary uses for sharrows. With stop lights at every block, and with the signal timing, traffic engineers believe this is a sound use of them, albeit at the outer bounds of established practice. In some ways it will be a good experiment. Slow bicyclists and families were unlikely to want to bicycle on Commercial anyway, and the sharrows ratify that those who are confident enough to bike on Commercial will be doing so largely using vehicular cycling practices.

If approved, it is not yet certain when the rebuild will occur. The summer of 2010 is still a possibility, but the condition of underground utilities may require a delay.

The Commercial project will also extend south to the 12th Street cut-off. This is more than we were expecting, and the workgroup expressed interest in fixing two problematic Y-junctions: The Y at Liberty, and the Y at Sunnyview. A subcommittee will meet to analyze the intersection and to discuss bicycle improvements to propose.

We also learned that the balance of funding for signage on Chemeketa Street and the Union Street RR Bridge had been completed. Look for more on this once it's installed!
Posted by Salem Breakfast on Bikes at 12:30 PM

Great! I'm glad this project is moving forward. Re: Chemeketa Street - What signage is planned?

The signage project runs from about 24th and Chemeketa on the east to Wallace and Edgewater on the west. It directs cyclists into downtown via Chemeketa (rather than Court; the existing signage is inconsistent), directs them through the Capitol Mall Park, and then gives directions for connections with the Union St. RR Bridge. It also brings up to current standards the design and installation of signs. The funding sources are ODOT, Downtown-Riverfront Urban Renewal Area, and the City's State Highway 1% Bike/Ped Fund. There may also be a West Salem component.

I like this layout *much* better than the right-only bike lane smack (no pun intended) dab behind diagonal parking. It seems to me, too, that "as far right [or left] as practicable" (or whatever that wording is) means well out into the lane where diagonally parked cars are concerned.