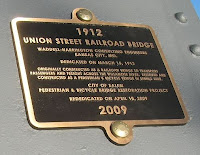 Though the construction was largely completed in 1912, its formal opening was in 1913, and the event was front page news. It was a big deal.

And it's still a big deal.  Its anniversary deserves a commemorative walk or bike ride - tip your cap!

Its anniversary might also remind us a certain humility in the face of projections about the future. As we consider another big bridge across the river, let's look at how the editorial page welcomed the bridge in 1913.

WE ARE GLAD TO SEE YOU

SALEM is indeed gratified at the splendid and unanimous response to her invitation to her neighbors to visit and celebrate with her the most important event in her history, the completion of the big P.E.&E. railroad bridge that places her in close touch with the immensely rich west side country. A section "fair as the garden of the Lord," and as rich as it is beautiful...

And while we celebrate today the completion of this important link, the steet bridge, we must remember that it is only a link. Just the starter for the long and strong railroad chain that is to bind the whole valley in closer union...

You are as welcome as rain to the drooping flowers, as a baby's kisses to its mother, as a holiday to a school boy in fishing time... 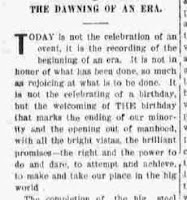 THE DAWNING OF AN ERA

TODAY is not the celebration of an event, it is the recording of the beginning of an era....[it is] the welcoming of THE birthday that marks the ending of our minority and the opening out of manhood, with all the bright vistas, the brilliant promises - the right and the power to do and dare, to attempt and achieve, to make and take our place in the big world.

The primary use on the line was to transport logs from the Falls City area and people on the interurban. Both uses tailed off significantly in the 1930s and after the war, it was hardly used.

So it seems the bridge really had a meaningful life of intense use for only two decades or so.

As we think about a third bridge, it is likely we are on the cusp of another structural change in transportation technology and use.  In 1913 it was not necessarily clear that private automobiles and trucks would totally trump the rails for logging and passengers.

In 2013 is not clear that private automobiles and trucks will remain so dominant.  In fact, there are good reasons to think their use will diminish - not to be eliminated, but to be eclipsed in the way rail is today.

It would not be surprising for a giant third bridge and highway, if built, to have a meaningful life of only a decade or two - and future generations be stuck with a relic and ruin, just as we were stuck with the Union St. RR Bridge.

Luckily we were able to repurpose it.  We might not be so fortunate with a giant, new third bridge.

(For more on Salem in 1913, see the 360 panorama of Commercial Street in Fox Blue, and the SHINE historical digest.  If you haven't been following the "third bridge," here's an intro with links to more. Critics have organized at No 3rd Bridge.)

Email ThisBlogThis!Share to TwitterShare to FacebookShare to Pinterest
Labels: Advocacy, Salem Government and Policy, The Year of 1913

Do not buy or peddle the frame of advocates and critics. If anything, the sprawl lobby pushing the gigantic oversized and unadaptable Bridgasaurus Boondogglus are the critics, criticizing any attempt to respond to the perceived problems as inadequate without even trying them. Meanwhile, the folks who recognize the Bridgasaurus for what it is -- a money grab by land developers and speculators, abetted by contractors and consultants on the lavish gravy train run by ODOT -- are the advocates for a better Salem, a city that doesn't destroy itself to service the sprawl lobby that has ruined countless other cities in the US with this exact same play book.

Ah...well, it seemed like the overheated praise in "You are as welcome as rain to the drooping flowers, as a baby's kisses to its mother, as a holiday to a school boy in fishing time..." and "[it is] the welcoming of THE birthday that marks the ending of our minority and the opening out of manhood" etc., etc., was obviously to be read in an ironic way now. Perhaps this was being oversubtle.

It'll be interesting to see how others read it.

To your point, I found a full page ad from 1911 that directly ties bridge construction to land speculation and development. Kingwood Park and Kingwood Heights were early subdivisions in West Salem. I'm not sure if the "new bridge" is the Union St. RR Bridge finished in 1913, a proposed bridge replacing the ferry, or the planned bridge at Center Street that was constructed in 1918. But very clear is the connection between outward development and a bridge.

American hucksterism and boosterism knows no limit, nor does the gullibility of taxpayers when promised something "free" that will in truth cost them plenty.