At Council on Monday the most interesting items are the list of projects for round two of the expected bond surplus and a request by Councilor Dickey for an update to Salem's foot cart ordinances. 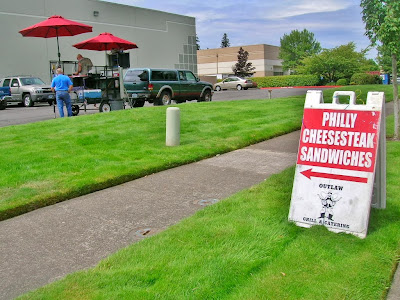 With the rise in breweries that lack kitchens as well as Portland's demonstrated success with food cart pods, bringing Salem's code for food carts up-to-date seems like a no-brainer. Still, it's interesting to see how biased against them the current code is:


Under current requirements, mobile food units are subject to regulations including (but not limited to) a maximum time period of six months in a twelve month period at any one location, a spacing requirement of a minimum of 500 feet from other mobile food units on the same side of the street, and 250 feet from other units on the opposite side of the street, and screening intended to make the unit appear permanent in nature.

Yeah, what she said!

Not on Council agenda, but very nice to see, is substantial progress on the Pringle Creek path!

The Commercial Street Bridge replacement funded by the bond included these paths on each side of Pringle Creek.  When the Boise parcel is developed, connecting paths through the private property to Riverfront Park will be included!

Round two of the bond surplus is at Council for approval, and you can read more about it here.  The only change from the time of that note is the addition here of one bike/ped project (and a reduction in the estimated cost of a couple of projects):  The project for sidewalks at Salem Heights Elementary is bumped up from a secondary recommendation into the primary list.  The main complaint about the list?  Too much of the money is sucked up by widening on Kuebler Boulevard.  We shouldn't be building auto capacity expansions until we do a whole lot more repair, preserve, maintain of existing auto capacity and build out our network for people who walk and bike.  Take care of the basics before adding more auto capacity we can't afford to maintain.


Public Works has an announcement for "administrative rulemaking," but the way the process is set up, it's nearly completely opaque.  On a proposed ordinance, or other process, the staff report would contain a list of the proposed language and rules.  This has nothing, and links in the staff report lead to 404 errors!  I don't know whether this is just bad typing or if the City's process for administrative rulemaking is flawed and officially offers a much lower level of transparency for public information.  (Emails into staff on Friday for clarification have not yet been returned.)

Included in the information reports is a decision on a replat for the Boulder Creek development along Clark Creek at 12th Street and McGilchrist.  (See here for more on that development.)

There's also a brief and very general discussion of direction for five of Salem's urban renewal districts. It didn't seem like there was anything surprising or that interesting in them - but details may surface as relevant later.  For example, the discussion of the McGilchrist Urban Renewal Area will surface at the next NEN-SESNA plan meeting, which will focus on McGilchrist.  (Look for more in a day or two on that!)

You wrote:Public Works has an announcement for "administrative rulemaking," but the way the process is set up, it's nearly completely opaque. On a proposed ordinance, or other process, the staff report would contain a list of the proposed language and rules. This has nothing, and links in the staff report lead to 404 errors! I don't know whether this is just bad typing or if the City's process for administrative rulemaking is flawed and officially offers a much lower level of transparency for public information. (Emails into staff on Friday for clarification have not yet been returned.)

I just want to say that a lot of citizens and neighborhood association people have been saying there is a problem with how the City operates when it comes to rule making. Very hard to be involved and yet there are very significant things that happen by these administrative processes.

Recently the City passed the newly revised UDC. If you look at it closely more and more decisions that affect us quite directly have been taken away from our elected officials and placed in the hands of administrators.

The only way that the public can comment is IF a City Councilor notices and agrees to call it up for discussion. They almost never do this, however.

Citizen's ability to engage in dialog on very important issues is being curtailed. I think in the long run we are going to find this is an increasingly bad trend, no matter your issue!

Very interesting! I hadn't followed the UDC "clean-up" very closely since the principals kept saying it was going to be "policy neutral." It was also beyond the scope of this blog.

Here's the follow-up on this particular admin rule-making process.

Maybe there will be more to say on this later.