ODOT to Update State Bike Plan; Cherriots Board to Meet

A couple of meetings this week are worth mentioning in passing.

The cover says everything you need to know: The Oregon Bicycle and Pedestrian Plan is old.

You can judge a book by its cover sometimes!

ODOT is rolling out a process for a new "Mode Plan" and the statewide advisory committee met in Keizer earlier this week for the first time. 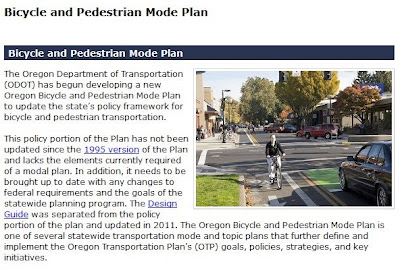 
The Oregon Department of Transportation (ODOT) has begun developing a new Oregon Bicycle and Pedestrian Mode Plan to update the state’s policy framework for bicycle and pedestrian transportation.

The Policy Advisory Committee Membership contains two Salemites:
Those representing other interests include:
If you're looking for the "half-full" perspective, BikePortland's got you covered.


As we reported back in May, this mode plan update has potential to be a big deal. When complete it will be adopted by the Oregon Transportation Commission and it could hold important sway over policy, funding, and project design decisions.

From here, it looks more like half-empty:  The committee composition looks like the Plan is definitely aimed at a pragmatic, political compromise.

That is to say, it does not look like it will result in a visionary document that would help guide Oregon to meet mobility needs in a 21st century of diminished car driving, as well as increasing temperatures and greenhouse gas emissions. Instead it looks like a enhancement to subordinate modes - improvements on the edges of things, but nothing transformative.  (I mean, it's still full steam ahead on the CRC and SRC with giant 1950-style projects.)

But as always, these studies and plans start with a blank slate, full of potential.  If the political winds shifted in the right direction, something like this could go crazy with transformational energy!  So it's worth keeping an open mind.


The Policy Advisory Committee met on Tuesday in Keizer for the first time, and it was interesting to see how Salem represented in the presentations:

Salem didn't come out so good, it seems.

The agenda, main presentation slide deck, committee charge, and stakeholder interview report, are all available on the committee website.

I don't know how closely I'll follow this, but the process does offer another opportunity to mobilize support and to shift the political winds - and funding environment - in favor of a more balanced transportation system.  The next meeting will be in February downtown at the Center for Business and Industry, and perhaps there will be more to say then.

The Cherriots Board of Directors meets today the 12th in Council Chambers at City Hall at 6:30pm.

Cherriots Rideshare, it turns out, gives a quarterly report to the Cherriots Board, and this is perhaps something to follow more closely.

Here's the report for the first quarter of the new fiscal year. In it is a table of ride-matching activity:

Without more context this isn't very meaningful, but it might be something to track each quarter.  It is, if nothing else, one source, albeit a limited one, of local bike commuting numbers.

There's some possible good news on the terrible bike access at the new transit center. In the September minutes from the Citizen Advisory Committee, a member notes that


people have been told they can’t bike around the Keizer Transit Center. [Cherriots staff] reported that security staff has been informed that bikes may be ridden to the park and ride and bike parking station.

Hopefully they'll work more on the Keizer Transit Center and incorporate feedback in the design for the South Salem Transit Center.

Also!  Rumors of neat things for February.   Stay tuned - because there might be some very good news on the CherriotsChannel.
Posted by Salem Breakfast on Bikes at 7:00 AM