In the Neighborhood Associations and Newsbits this Week

If over the weekend you went into "The Bureau," the new taproom for Santiam Brewing in the Reed Opera House, you might have seen an enlargement of this photo!

The "Salem Beer" Plant and sign, naturally enough, is the draw, but there's also the predecessor to Boise Cascade on the left, the old Water Plant on the right (just behind the X of the RR crossing sign), and on the near side of the bridge over Pringle Creek are two businesses, Acme Wrecking and GE Appliance.

They're located exactly where the City proposes to build a new Police Station!

This stretch of Commercial street could definitely do with more business and activity near the sidewalk!

And did you see the maps of high-, medium-, and low-income neighborhoods in Salem over the weekend? Nothing probably very shocking, but they were still interesting.  (Maybe the paper will overlay each of them with a "third bridge Salem Alternative" alignment?)

Last week was quiet, but this week brings several meetings of neighborhood associations.


Remember also the prospect of a high-speed expressway alongside the park - and the likelihood of kids darting across the road.

In the minutes from last month's meeting was this possible threat to the new Eola bike lanes:


Todd Klocke presented the removal of parking on Eola between Cascade Dr. and Kingwood to make room for a bike lane. Much discussion about two homes that use Eola for parking. They will be informed of the plans and given an opportunity to talk about it with either city staff or at WSNA meeting. Kenji mentioned there may also be some new sidewalks in that area.

If you live in West Salem, remember the "missing" bike lane on Burley Hill and be watchful!

Here's a note on a different connection. It's interesting how much real estate the paper gave to the story - maybe a slow news day, but it's also a comment on the fact that these connections aren't yet assumed as a baseline; they're still "special" in some sense, an amenity and not fundamental transportation infrastructure. 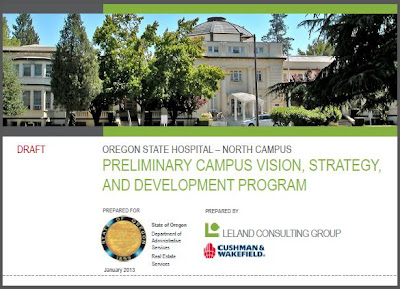 On the agenda is discussion of "NESCA’s Letter about the Oregon State Hospital North Campus." Not sure what that is, but the campus redevelopment is an important project for Salem!

Wednesday at the Straub Center - Earthquake!

As part of the Environmental Lecture Series


Cascadia: Ready or Not!
Disaster Preparedness in the Pacific Northwest
with Althea Rizzo

Wednesday, December 4, 2013 (7pm at the library in Loucks Auditorium)

Dr. Rizzo will discuss the current understanding of the impact of a Cascadia subduction earthquake on Oregon. The people and the built environment are vulnerable but resiliency can be achieved. Cascadia earthquakes shape our landscape, so come and learn more about creating a Cascadia-resistant Oregon. Dr. Althea Rizzo joined Oregon Emergency Management in 2008 as the Geologic Hazards Program Coordinator after completing a one year National Weather Service-funded program as Tsunami Coordinator for the City of Lincoln City. She is a member of the National Tsunami Hazard Mitigation Program and serves as the co-chair of the Warning Subcommittee. She is a member of the Cascadia Region Earthquake Workgroup and is the co-chair of the Education and Mitigation Subcommittee. She has successfully implemented outreach programs for seismic hazards such as earthquakes and tsunamis. Dr. Rizzo has been a frequent instructor and lecturer on hazard mitigation, risk reduction and outreach program design and implementation.

Remember, Salem has many bridges that will likely collapse in an earthquake!

In particular, the Marion Street bridge is rated "structurally deficient."

A representative from the City will also be talking about State Hospital North Campus project.

The City Traffic Engineer will also give an update on the Fairgrounds Road Barrier. Council funded it with bond surplus, but the project I believe also is smaller in scope that this diagram (which is from an earlier draft concept).  Hopefully we'll learn more!

Finally, a cheering note about a bike rack competition at Willamette!  The winning design will be fabricated and then installed on campus.  This could be amazing!