ICYMI - The full talk for Gil Penalosa's visit on sustainable cities for the young and the old.

In February, the board of the Salem Bicycle Club approved a new club committee and appointed three members.  From the March Spokes:


SBC Safety/ Education Committee: The Salem Bicycle Club actively promotes bike safety to cyclist, local governments’ public entities. Doug [Parrow] is working with local safety agencies, Oregon Parks and Recreation and with Marion County Sheriff’s office to improve bike routes and the enforcement of laws protecting cyclists....Hersch [Sangster] is on the Traffic Safety/Bikeways/Pedestrian Committee and Planning Commission in Keizer and is on the Salem-Keizer Transit Budget Committee and is a bicycle advisor for them. Kiki Sangster is active in doing education on Safe Routes to School with ODOT Traffic Safety and is connected with Salem-Keizer Schools....Doug has an incident report form that will be available through the Club’s website that cyclists can use to report safety related incidents. These reports will help the Committee in reporting and discussing safety issues with agencies and in doing education. Doug and Hersch will develop goals for the Board to review in the future. 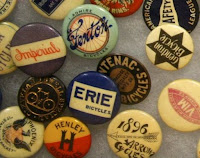 More from Salemis on Ray Youngberg

You might remember the story about Ray Youngberg and his great collection of bike memorabilia.  Over at Salemis, Sarah says that she loved Ray's stories so much she had to write a follow-up about Ray's life:


At age 40, he entered the competitive scene again in the veterans age group. He took third in the Oregon state championship one year, second the next, and first place the following year...

He also “got the bug,” as he describes it, to ride from Portland to Salt Lake City again. He made the trip three more times: in 1976, 1985 and 1987. The last time, at age 52, he decided to see how fast he could do it, so he joined the UltraMarathon Cycling Association to help him train.

He started out from Portland City Hall at midnight with a small caravan of vehicles following him. He rode night and day, taking half-hour breaks for sleep every so often. He pulled in to the city hall in Salt Lake City just 64 hours and 40 minutes after he started the route — an official city-to-city record that still stands.

When it was first posted online last night, the headline "With Riverfront Park expansion on horizon, how's the city going to balance caring for older parks?" was much better!


Salem’s park system is growing. Construction of a $10 million Minto Island Pedestrian and Bicycle Bridge is expected to begin this summer. The city has a pending $2 million deal to buy 3.8 acres of property for an expansion of Riverfront Park.

But as the city pushes forward with its vision of green jewels along the waterfront, could it be in danger of neglecting its older parks?

During discussions about a park bond in 2009, which never made it to the ballot, the city identified $8 million to $12 million in repairs and renovations as priority projects.

“If we have an Achilles’ heel, it’s that some of our facilities are getting old,” said Mark Becktel, parks and transportation services manager. The 2009 estimate of the most needed repairs hasn’t been updated, he said.

Operations, maintenance, and preservation, I tell you! One commenter points out the use of prison labor, a modern "chain gang," in our parks. Some others use the problem as a wedge for criticism of the Minto Bridge.  Still others talk about the proposed Police Station and Third Bridge.

Yes, we're widening roads and expanding capacity when we can't maintain what we already have.

It's a deep problem that money for new stuff is too often easier to find than money to keep and maintain existing things.
Posted by Salem Breakfast on Bikes at 8:15 AM